Well, I got my Lucid Custom Mini VC IH on Monday...USPS screwed me out of 420 delivery!! haha

This is a pic of it: 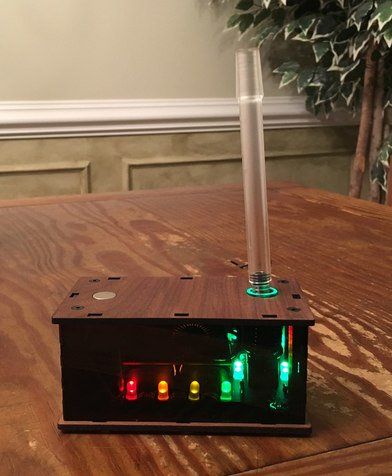 This one is smoke plexiglass and "maple" according to the manf, but if its Maple then its stained maple (and really the grain doesn't seem to be tight enough for maple) but looks like walnut. I don't care, maple was Chris of Lucid's suggestion and I like the way it looks (and its right up there with grinder color...yeah, I like the colors I picked for my BCG, but its the first time in my life I even ever thought about grinder color!! LOL.

This is a Mini. I picked that because I wanted to be untethered from the wall with it and I prefer the pressure sensitive switch in the heater (put the VC in, push down) with a small main power button on the side. I believe that some of the other models he makes, e.g. the wooden enclosure units he shows, have a larger, outside switch to turn the heat on.

The main power button is on the side of the box and its a very small, plastic, slide switch. I would rather have the rocker type power switch shown on the metal model as I think they would be more robust over the long term. The switch looks like its on the motherboard itself so there is that.....but I have not had any issues with this switch yet so this is really just negative projection on my part.

There is a series of LEDs (red, amber, yellow, green) that show remaining battery capacity. Very pretty, but since Li ion type batteries do NOT discharge linearly, I tend to discount most all batterie indicators unless there is a LOT more smarts in these boxes than I think.

It comes with a wall wart (12v, 1 amp) with apparent overcharge protection built in. Plug it in, when the light on the wart goes from red to green you are full charged.

I have only used it for one evening's sessions but so far it works great and I'm very happy with it. I'm getting the click on the first heat cycle in approx up to 5-one-thousand count, then about up to 3-one-thousand on subsequent heat cycles (I reheat immediately upon the cool down click and do that until load is cashed).

Chris' ordering process, communications, and CS were very good. He shows on his web site that each is made to order and will take 2-3 weeks. I was expecting mine in 2 weeks based on some feedback from Chris....but it took 3 weeks in fact.....mostly due to Chris' wife needing an appendectomy. I'll give him a week for this! haha Chris did promptly return each and every email I sent when discussing customization, order delivery, and some product questions that I had. I'm very happy with Lucid's responsiveness.

I have not had a chance to see where the batteries are for eventual change out nor the two resettable fuses (circuit breakers, maybe?) and I'm resisting the urge to pull the screws and see what's in there. Its working very well and I think I will just leave it be unless and until it doesn't.

Not much else to say about it....its a very nice package, functions very well, and the transaction with Lucid was perfectly acceptable in all ways.

Nice review as always would you recommend it over any of the other available heaters?
Do for self.

arb said:
Nice review as always would you recommend it over any of the other available heaters?
Click to expand...

Not necessarily recommend it over others. I just liked this guy's approach and had confidence based on our correspondence. Also, both Pipes and Flux Heater have significant lead times (Flux is saying minimum of 10 weeks) which sort of clinched it.

I believe that they all function adequately, I just decided to take a flyer on Lucid and I'm happy with my purchase.
Cheers

I am still LOVING this IH for the VC.

Now, I do have the latest Ti tip on the @phattpiggie stem that I won in one of @momofthegoons contests....prized possession, that.

But mostly I've been using a Ti tip maybe one gen older than current on my DDave glass wand which is what I mostly use (thru an FC-188 Ion knockoff).

The one I have been using does have larger air grooves than the little tiny line grooves of OG tips but not as wide as the latest and has seven fins, I believe, vice the five of the latest. So, with my new IH in hand, on 420 I bought a new latest design Ti tip and cap from Dyan for the wand.

Ran it last night and love it.

Now, I never really minded using a torch lighter but I do like the IH better. Very easy to use and seems to provide more even heating. I've been taking it out of the IH at the click and my vapor is very slightly less dense then with torch lighter but on the order of one or two more draws than I would get using the torch. They were still very fine draws of vapor and if I want I can always leave it in for a second or so after the click if I want hotter and harder.

I'm also very happy with Lucid's customer service. Had one small issue with the wall wart part of the charging cable. It should show red and then when the device is fully charged it should change to green. Well, the red LED in my OG charger didn't work (but the charger and the green LED did). Nonetheless, Chris shipped me out a new on within a day. Can't ask for more.

I highly recommend this device if you are looking at an IH.
Last edited: Apr 29, 2019
Cheers

And I get called a heathen.

I hope Dynavaps IH is a bit cheaper, these can get pretty expensive, even the DIY is $120+ freight no doubt