Trial Will Test Synthetic Cannabinoid for Weight Loss in Obesity​

Researchers are about to enroll the first patient in a pilot study for potential weight loss with nabilone – a synthetic drug similar to the active ingredient in the marijuana plant (hemp).

Although cannabis has been linked to “beverages,” paradoxically, people who use cannabis regularly have a lower body mass index (BMI), lower risk of obesity, and a lower risk of developing diabetes than people who don’t use cannabis,” Justin Matheson, Ph.D., University of Toronto, Ontario, Canada, in an article in UT News.

Matheson, a postdoctoral research fellow at the Center for Addiction and Mental Health, said in an interview with Medscape Medical News.

“Unfortunately, the drugs that have been tried before, cannabinoid receptor antagonists,” such as rimonabant, “already have serious psychological adverse effects,” he noted.

However, nabilone, which is approved to treat nausea, has an acceptable safety profile, and animal studies suggest that it may be effective for weight loss in obese patients.

Therefore, the researchers, led by Bernard Le Foll, PhD, and chair of addiction psychiatry at Timerte School of Medicine, University of Toronto, designed a preliminary feasibility and safety study to test this hypothesis.

First human study of Nabilone for weight loss in obesity​

Delta-9-tetrahydrocannabinol (Δ9-THC), commonly known as THC, is the primary psychoactive compound found in the marijuana plant and is one of several cannabinoids.

Le Foll was part of a research group that published a study that showed that Δ9-THC reduced weight gain in mice with diet-induced obesity but not in lean mice.

Sold under the brand name Cesamet in the United States, nabilone is approved by the U.S. Food and Drug Administration to treat nausea and vomiting caused by cancer chemotherapy. Nabilone has various brand names in Canada, where it is also available as the generic drug.

In clinical trials, the most common side effects of nabilone were drowsiness, dizziness, dry mouth, and euphoria.

Generic Nabilone capsules are at a dose of 0.5 mg twice daily.

Other secondary outcomes include:

The researchers expect to have the results of the study within two years.

Unpacking the Hype Around THCV, aka ‘Diet Weed’​ 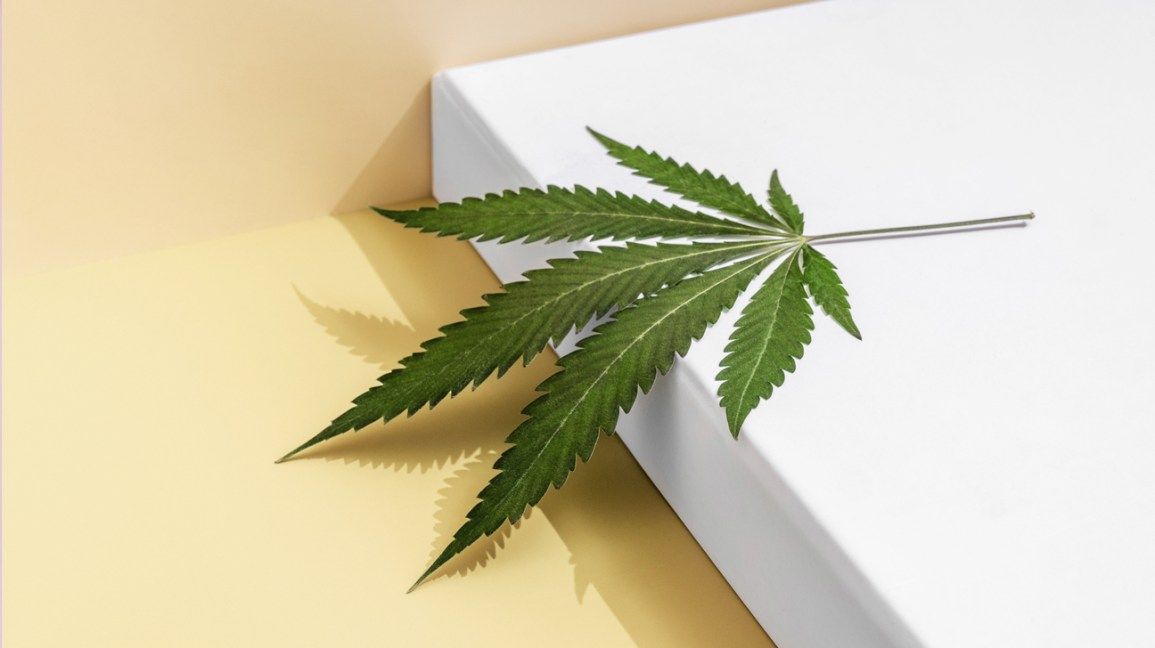 Share on PinterestJeremy Pawlowski/Stocksy United
Dubbed “diet weed” and “weederall” for its purported appetite-curbing and energy-boosting properties, delta 9 tetrahydrocannabivarin (THCV) is fast becoming one of the latest cannabinoids on the market.
As with many other cannabinoids, including better-known compounds like CBD and CBN, THCV might not have intoxicating effects linked to THC, despite having those all-familiar three letters in its name.

How does it compare to THC?​

It’s hard to give a straight answer.
“Anecdotally, people report that, when [THCV] is used in combination with THC, THCV can mitigate [the intoxicating] effects of THC,” says Jonathan Vaught, PhD, the CEO of Front Range Biosciences, an agricultural biotechnology company that specializes in hemp genetics.
Front Range Biosciences produces strains rich in THCV. These strains have historically been difficult to grow and process, because they couldn’t be easily scaled up due to little demand and an expensive isolating process.
As for THCV on its own, “it’s a little less clear,” Vaught says.
THCV is mainly found in cannabis products alongside THC. If the cannabinoid is isolated, purified, and “put into things,” it’s not even clear whether it’s intoxicating at all, he adds.


What are the effects?​

THCV is linked to a few potential effects. Here’s a look at where the research stands.

While most people associate cannabis with increasing appetite, THCV might have the opposite effect.
Still, the majority of the evidence around THCV and appetite is based on animal research, according to Saorise O’Sullivan, PhD, a researcher and scientific advisor to Artelo Biosciences, a clinical stage biopharmaceutical company.
“The theory behind this is that THCV can block the CB1 receptor. [The CB1 receptor] is well known to stimulate appetite, so blocking this receptor could [reduce appetite],” O’Sullivan says.
This idea is backed by a few animal studies. For example, a 2009 studyTrusted Source suggested that THCV may reduce food intake and weight gain.
A 2013 studyTrusted Source found that it may reduce glucose intolerance related to obesity.
O’Sullivan was the lead author on a human trial investigating the effects of THCV on patients with type 2 diabetes.
The randomized, double-blind, placebo-controlled studyTrusted Source found that purified THCV — administered in doses of 5 mg twice daily for 13 weeks — decreased fasting plasma glucose and improved pancreatic beta-cell function, adiponectin, and apolipoprotein A in people with type 2 diabetes.
However, there was no impact on appetite or body weight in these patients with THCV treatment compared with the group who received placebo.
A human study from 2015Trusted Source looked at how a single dose of 10 mg THCV affected food reward and aversion.
The authors found that THCV actually increased the activation of several brain regions in response to chocolate or to aversive food stimuli (rotten strawberries). But it didn’t seem to affect the ratings of pleasantness or desire for the food stimuli.

“Taken together, the published scientific evidence does not yet support the idea that THCV is an appetite suppressant,” O’Sullivan says.
Click to expand...

O’Sullivan adds that, though the jury is still out on THCV’s appetite-suppressing properties, preclinical animal research suggests there could be a role for THCV in a broad range of diseases and disorders, including:
Human research with THCV is more limited, but a small trial from 2015Trusted Source among cannabis explored its potential to reduce some negative effects of THC.
The authors suggested that 10 mg of THCV may reduce increased heart rate, subjective feeling of intoxication, and verbal recall issues caused by THC.

While there’s still much to learn about THCV, O’Sullivan says it’s mostly safe to try. No major side effects have been reported in the few human studies that exist, which involved doses of up to 10 mg per day, for as long as 13 weeks.
She notes, however, that some participants reported feeling a bit more tired than usual, so you may want to avoid driving until you know how it affects you. And you’ll definitely want to avoid the road if you try a product that also contains THC.
As always, it’s best to talk with a healthcare professional before trying any new vitamin or supplement, including cannabis products.

Where to find it​

According to Vaught, THCV’s availability has “been very limited.”
“There are only a limited number of plants out on the market that produce viable quantities of this compound, and they’ve generally been hard to grow, low-yielding plants. The supply chain is not strong, it’s a rare cannabinoid. It’s expensive,” Vaught says.
Vaught says he and his team have noticed people isolating THCV from plants and infusing it into different manufactured products, like edibles and cannabis drinks.
This opens the door, he adds, to increased yield and supply chain accessibility by enticing growers to produce more THCV.
It also paves the way for more traditional products, like flower or vapes, that come directly from the plant (as opposed to, for example, an edible infused with an isolate).
Specific strains to look out for include Dayslayer, which Vaught says is the “hottest new THCV genetic on the market.”
Durban Poison, already a popular strain, along with Pink Boost Goddess, which is a proprietary cultivar developed by northern California cannabis farm Emerald Spirit Botanicals, are also available in the consumer market where adult-use cannabis is legal.

Like most minor cannabinoids, THCV is still under-studied and under-produced. But, thanks to consumer interest, it seems like that might be changing.
Just be wary of overenthusiastic claims around weight loss and other effects, as the research on THCV is still in the very early stages, especially on its effects on humans.

FYI
Many states have legalized cannabis containing more than 0.3 percent THC for both adult and medical use, though it remains illegal under federal law. Find out about the laws in your state here.
Click to expand...

Being high is effort, it takes energy from the body to metabolise the compounds we ingest..
It depletes sugars..

So it stands to reason that if you get high, and dont give in to the munchies, you will lose weight no???
Vapexhale cloud evo hydraturbine x 2
Arizer eq modded ddave v2+3 + ssv wand...
Arizer solo + d020-d...
G4 7 fin Twoody xl doublecrown vapcap with titanium condenser...
4 more g4 7 fins with custom stems from @phattpiggie and @DDave...
Old g2 vapcap with vong...
Kannastor gr8tr grinder...

It also stands to reason if you watch what you eat, and exercise regularly you'll loose weight. I think genetics has more to do with weight loss than weed, imho .
You must log in or register to reply here.
Share:
Share
Top