A small study looked at marijuana use to cope with menopause.

More than a quarter of women say they have used medical marijuana to treat menopause, according to a new study out this month.

Researchers with the San Francisco VA Health Care System released the findings during the 2020 Virtual Annual Meeting of The North American Menopause Society, which began this week. First, a caveat about the pool of respondents: the researchers said they examined a sample of 232 women veterans living in Northern California—a limited scope, to be sure.

But the findings do still suggest that cannabis may be more prevalent as a menopause treatment that previously understood. According to the study, “[c]urrent or ever use of cannabis for menopause symptom management was reported by 27% of all participants, while an additional 10% expressed interest in future use.”


The researchers concluded by saying that study “raises questions about the generalizability of these findings in other regions with differing legal and cultural attitudes toward cannabis use, the degree to which women disclose cannabis use to health care providers when discussing menopause management, and the specific symptoms targeted by women using cannabis for menopause symptom management.”

“These findings also highlight the importance of understanding the potential risks, benefits, and effectiveness of cannabis for this indication,” they wrote.

Carolyn Gibson, a psychologist and researcher at the San Francisco VA Health Care System and the lead author of the study, said that the findings “suggest that cannabis use to manage menopause symptoms may be relatively common.”

“However, we do not know whether cannabis use is safe or effective for menopause symptom management or whether women are discussing these decisions with their healthcare providers—particularly in the VA, where cannabis is considered an illegal substance under federal guidelines,” Gibson said in a statement. “This information is important for healthcare providers, and more research in this area is needed.”

Dr. Stephanie Faubion, the medical director of the North American Menopause Society, said the findings pointed to “a somewhat alarming trend and the need for more research relative to the potential risks and benefits of cannabis use for the management of bothersome menopause symptoms.”

Some advocates may highlight the study as more evidence of marijuana’s appeal to military veterans. A bill that was approved by the House Veterans Affairs Committee earlier this year would authorize physicians to offer recommendations for cannabis in states where the treatment is legal. (Medical marijuana is legal in more than 30 states).

“While the therapeutic use of cannabis by veterans is not altogether uncommon, this study is among the first to highlight veterans’ use of marijuana for this particular condition,” said NORML Deputy Director Paul Armentano. “Given cannabis’ relatively high rate of use among the women in this cohort, scientists and others would be well-advised to further explore its safety, efficacy, and prevalence among women experiencing menopause.”

Cannabis and perimenopause—it’s a hormone thing​

When Amber Dawn Mailhoit, 38, recently missed a period she immediately thought she was pregnant, even though her husband’s vasectomy was years ago. “Stranger things have happened,” says the Kelowna mother of two teens.


She started noticing other symptoms, too: sleep disturbances, body aches and cramping that “just came out of nowhere.” When Mailhoit experienced a second missed period, accompanied by dizzy spells and strong cramps, she knew there was something more going on.

“So, I Googled until there were no menopause sites left for me to read and eventually came to the conclusion that I was, indeed, in perimenopause.”

Living with endometriosis, Mailhoit is used to dealing with a measure of pain about three weeks out of every four—a ripping, burning feeling all around her abdomen area. In her experience, cannabis has been the most effective in relieving endometriosis symptoms.

Since Mailhoit already used cannabis to manage endometriosis-related pain, it was her first go-to to ease these new, intense uterine cramps. “I’ll have just a few puffs of a joint and within minutes I’m feeling relaxed, my uterine muscles quiet down, and I can focus on my breathing enough to calm much of the pain.”

By self-medicating with cannabis, she says she’s found her own way to get quality of life back, using it on an as-need basis for pain management and to help with sleep.

“Cannabis has given me a way of coping with perimenopause, allowing me to be the leader in my life and giving me the ability to manage my symptoms without added medications,” she says, noting she will, on occasion, take Advil as a last resort.

Everyone with a uterus—roughly 51% of the global population—knows that at some point in midlife their periods will stop. According to the North American Menopause Society, the average age of menopause is 51.

While Mailhoit may seem on the young side for menopause she is within a normal range for perimenopause, a transition phase that begins anywhere between four to eight years before that final menstrual period, which happens anytime between the age of 40 and 58.

A recent University of Alberta survey of 1,500 women—68% of whom were peri- or post-menopausal—shared Mailhoit’s symptoms of cramping, lack of sleep, night sweats, hot flashes and muscle aches. 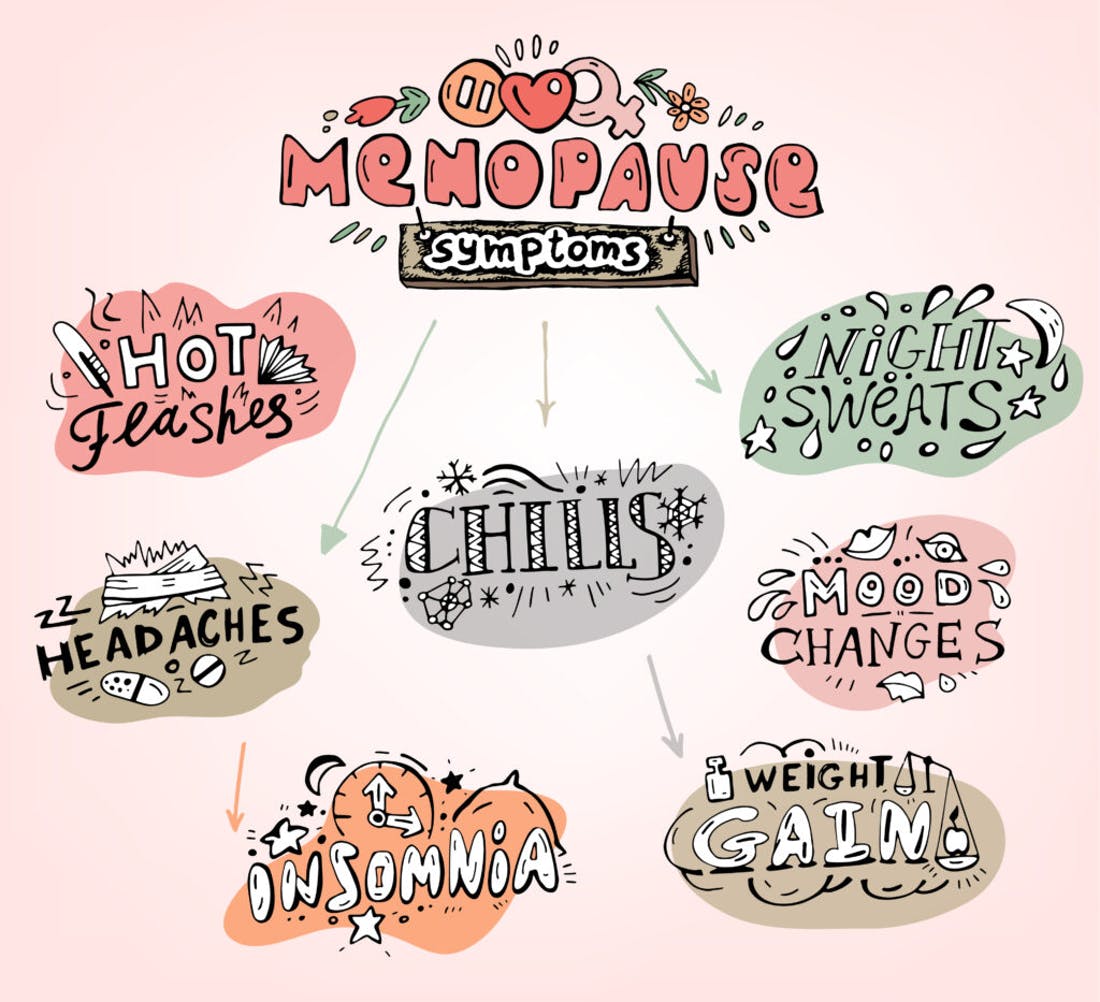 “This Canadian survey found similar results to a previous smaller study done in the US with 232 perimenopausal military veterans, 27% of whom reported using cannabis to ease symptoms with another 10% saying they wanted to try it,” says Nolan.

What the evidence says—for now​

While there is a growing body of anecdotal information supporting cannabis use for perimenopausal symptoms, Nolan says scientific research just isn’t there yet with demonstrated safety and efficacy.

This explains why some healthcare professionals might be hesitant to suggest cannabis for symptom management. Nolan said in a recent review by Canadian researchers, just three small cannabis-perimenopause studies were available for them to examine.

Their conclusion? “More research is needed.”

Some medical doctors are, however, warming up to cannabis for easing the years-long transition into menopause. California-based integrative gynecologist Dr. Felice Gersh has been quoted saying “cannabis products do offer an alternative to what’s out there.”

And by “out there” she means hormone replacement therapy (HRT). Mainstream medicine’s go-to offering for relief of menopause-related symptoms. Another option is anti-depressants. Both of these medicines come with considerable side effects.

As medical director for Aqualitas, Nolan stresses that people experiencing perimenopausal symptoms should first consult a healthcare practitioner to determine if cannabis is a good fit.

Not only are major cannabinoids THC and CBD tolerated differently by everyone, but it’s also a good idea to rule out more serious conditions that could be causing symptoms.

Where does cannabis fit?​

Anecdotal evidence suggests hormones influence how cannabis is felt in the body. Ashleigh Brown, patient advocate and CEO of SheCann Cannabis, says 92% of SheCann’s membership base have reported both symptom variation and a changed response to cannabis, based on where they are in their cycle.

“The ebb and flow of reproductive hormones definitely have an impact on our patient population and their symptoms. Over the years, SheCann has noticed patterns in the way that our members’ bodies respond to cannabis during our cycles, too.”

Among her SheCann members, which are just over 10,000 strong, Brown says those in perimenopause and menopause have reported parallels between fluctuating hormone levels and felt effects of cannabis.

“The combination of the two can be unpredictable, especially when trying to manage symptoms such as insomnia…It’s not something that gets discussed very often, and it’s really validating for us to dialogue on this and learn that we aren’t alone.”

“We definitely need to see more research and education on cannabis and reproductive hormones.”

Despite the lack of conclusive evidence through randomized clinical trials, “the gold-standard of medical research” says Nolan, thousands are still turning to cannabis to manage perimenopause symptoms.

Apart from re-emphasizing a consult with a healthcare practitioner (who can be a family doctor or someone from a cannabis health clinic), Nolan advises the ‘start low, go slow’ guidance from Health Canada and other experts are “definitely important to keep top of mind.”

As for Mailhoit, she is now getting a full night’s sleep while the cramps, muscle soreness and backaches have all improved dramatically. And while cannabis works well for her, she admits it may not work for others. “I have relatives who prefer estrogen cream and have never tried cannabis of any kind. You do you,” she says.

“No one can tell you what is going to work best for you, but I’d say if you are looking for relief from symptoms of perimenopause, don’t knock cannabis until you’ve tried it, because you just never know.”
You must log in or register to reply here.
Share:
Share
Top