There's been an explosion of hemp extracts available due to the new federal hemp law passed last year. All sorts of new hemp cannabinoids being produced now, Delta 8, delta 10, HHC, THC-O , THC-P. They are available in cartridges, edibles, concentrates, and infused hemp flowers, pre-rolls . Have you tried any of these products ? Would you try any of these ? Or are you concerned about health issues ? I get emails everyday trying to sell these carts and edibles and I'm wondering what testing if any has been done ?

Staff member
I've noticed you can even buy hemp based products at Walmart and the local hardware store now (Hempvana). But that product line doesn't concern me as much as the unregulated carts that are being sold as CBD or Delta 8. It reminds me of the early days of legalization.... where the carts were untested and had all sorts of carriers used that were unhealthy to breathe (like coconut oil).

@Riverrat would you care to share your experiences with Delta 8?

I have no desire to try any of this stuff. 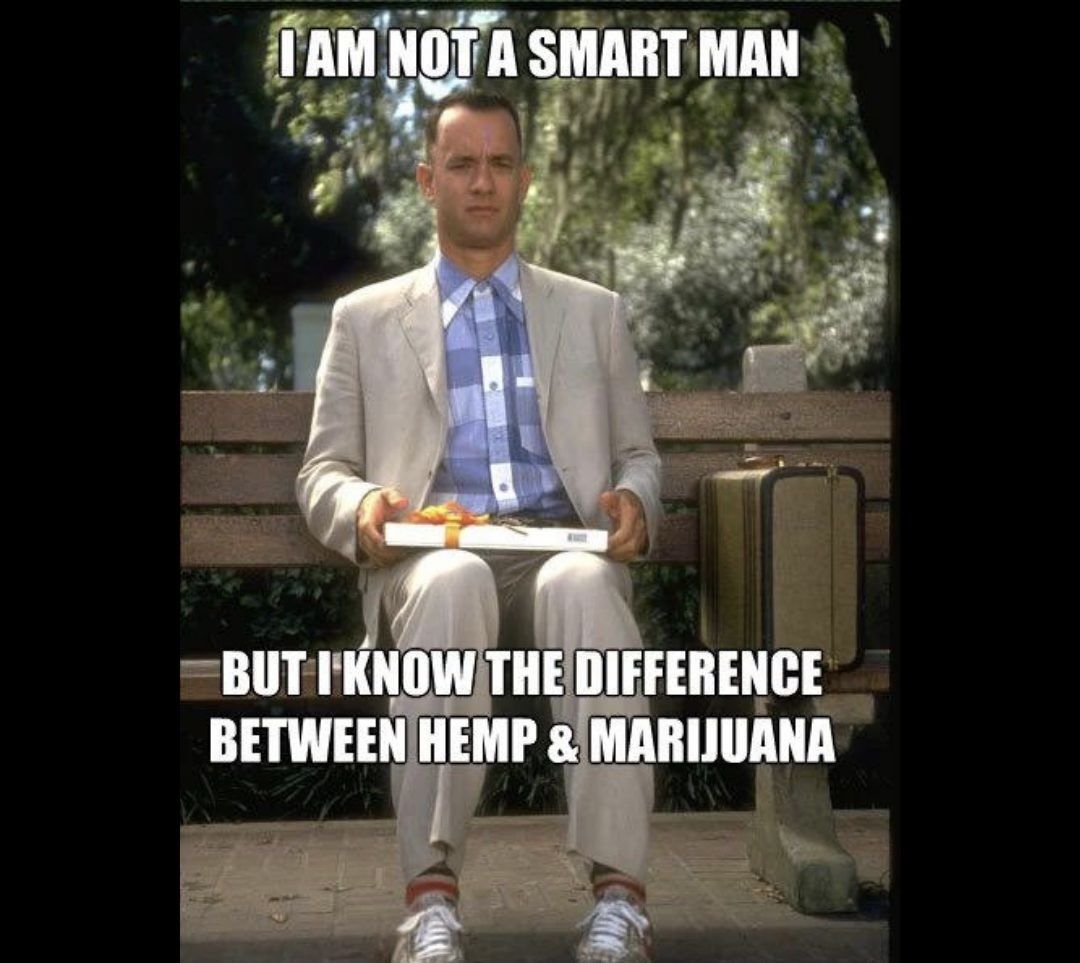 I first heard of Delta 8 about a year ago. Here in Kansas Herb is not legal. However some local farmers jumped whole hog into farming Hemp, a freaking bunch of hemp was produced here in Kansas.

To get to the point what bothers me most about the Delt 8 & other products carrying the Delta moniker are the unknown lasting or short term health effects. This stuff is very tacky in dab form. How tenacious is the vapor at binding with inner lung tissue ? Not something I want.

The thing that bothers me most, by my own admission may not be an issue at all. However the Delta 8 dabs dont change over to vapor in the same manner as herb based trates. Delta 8 will take some very serious heat. It reminds me of synthetic grease we kept on our 2 SAWS overseas one time.

I'm fully aware of the nature of my reasoning here. It's based on what I've seen & feel with little facts as to why I will no longer use Delta 8. It's really simple .... I SIMPLY DONT KNOW. There remain to many questions at this point in time & there is way to much room for variation & additives ( To Make Flow More Better In Karts ) among different producers of it.

Also I have to ask myself, what are the Delta products offering that I dont already have ? One thing , it's a powerful one, its legal. After the legal hurdles then availability is no longer the issue it once was.

Beyond this it's not cheaper & the effects can be less than or just different. So at this point I see no reason to continue with it.
Last edited: Jan 7, 2022 The rise of delta-9 THC products derived from hemp, commonly sold online and shipped across state lines with little of the taxes or safety requirements faced by marijuana producers, has the cannabis industry bracing for tighter state and federal limits on intoxicating hemp products.
As Congress starts to talk about the upcoming 2023 Farm Bill and state legislatures hold annual sessions to update laws, many expect a raft of new rules in coming months about how hemp extracts can be used.
The concern comes as hemp manufacturers have responded to limits on lab-created delta-8 THC products by concentrating the delta-9 THC that exists naturally in the hemp plant to produce intoxicating edibles, vapes and tinctures.
“Being on the hemp side of the regulation, we’re able to operate in markets that are currently underserved due to lack of regulations,” said Chris Fontes, CEO of Trojan Horse Cannabis in Commerce City, Colorado.
Trojan Horse Cannabis makes gummies with 10 milligrams of THC and 100 milligrams of CBD, all derived from hemp plants and sold to other cannabis retailers and straight to consumers, even in states with legal access to marijuana.
Fontes dismisses pushback from his marijuana colleagues that he is unfairly cutting corners by using hemp to make THC.
“I don’t think anyone in the marijuana space would ask, ‘Why do you sell cannabis to consumers?’ It’s the same reason they sell cannabis to consumers. All the reasons that they want consumers to have access to a well-manufactured product is the same reason we’re in this space.”
Inspired by D-8
The rise of intoxicating hemp products can be traced to the unexpected market success of delta-8 THC, an isomer of the better-known delta-9 THC molecule created when raw cannabis is heated.
The D-8 boom took many cannabis operators by surprise.
And it prompted a growing number of hemp operators to see potential in a cannabinoid they’d previously downplayed.
We need your insights: MJBiz Factbook Survey
In the rapidly changing cannabis industry, reliable research data is critical for making informed decisions.
Help us build the 10th annual MJBiz Factbook by answering a few questions about your industry sector and company performance. It’s completely anonymous.
Let’s grow better, together!


Hemp extracts naturally contain delta-9 THC, though in smaller amounts than found in marijuana extracts.
Many hemp extractors remove THC from CBD products to promote CBD’s nonintoxicating effects and to attract consumers who face THC drug tests.
The delta-8 THC boom changed that approach for some.
Throughout 2021, states and marijuana advocates derided delta-8 THC products as unsafe because they’re commonly created through chemical CBD conversion without regulatory oversight.
That got folks in the hemp space wondering: Why not simply concentrate and promote the delta-9 THC that occurs naturally in hemp extracts?
After all, a 5-gram gummy could contain 15 milligrams of hemp-derived delta-9 THC and still meet federal requirements of being a legal item with no more than 0.3% THC by dry weight.
At Cornbread Hemp, a CBD manufacturer in Louisville, Kentucky, executives saw the delta-8 THC trend as evidence that some consumers are looking for intoxication from hemp products and aren’t opposed to hemp-derived THC.
“It was always there if you looked at a COA (certificate of analysis), but it seemed like no one wanted to talk about it,” Cornbread Hemp co-founder Jim Higdon told MJBizDaily.
By 2021, his company moved the listing of THC in some of its tinctures, edibles and topicals to the front of the package, a response to the D-8 boom. Sales increased.
“We looked at what was happening and thought, ‘If this D-8 is so popular, we’ve got naturally occurring D-9.’ But at the time, we weren’t being forward with our marketing of it. And so it just gave us the courage to get out front and be like, ‘This is what you’re looking for, and it’s natural and legal.'”
Cornbread Hemp wasn’t alone. Executives at Enjoy Hemp, a CBD manufacturer in Miami, had a similar reaction to the D-8 trend.
“As soon as delta-8 (THC) started getting a lot of attention, I started noticing that CBD sales started dropping,” Enjoy Hemp CEO Adam Levit said.
“It became clear that we need to move to the real cannabinoid that everybody’s looking for, the active ingredient in marijuana, delta-9 THC. We’re able to derive that from hemp, and it’s a lot more accessible for people.”
Unwelcome competition
Of course, the accessibility Levit mentioned isn’t embraced by many in the highly regulated marijuana space.
Many marijuana operators would love to sell products online and ship them across state lines, without the taxes and regulatory hoops commonly faced by people working with higher-THC versions of the same plant.
“It’s no surprise that full-strength cannabis operators feel competition now,” Higdon said.
“They thought, along with many other people, that there was a vast distinction between cannabis and hemp. And now they are coming to terms with the full understanding that hemp is cannabis.”
Fontes called the marijuana pushback understandable.
“The taxes that we see in the marijuana space are literally crushing the industry,” Fontes said, pointing to California as evidence that steep marijuana taxes are keeping illicit cannabis markets alive.
“It’s putting businesses under duress and making it so they can’t really perform,” he said.
Fontes, Higdon and Levit agreed that consumer-safety protections should be required of the products they make.
But they want those changes to come from Congress – giving hemp operators a common playing field – and they worry that marijuana opposition could result in a shortsighted ban on any intoxicants derived from hemp.
“What’s happening to marijuana businesses, I fully sympathize with them,” Fontes said.
“I don’t consider them my enemy or my competition, and I think it’s unfair the amount of taxes they pay.
“My argument would be, though, instead of creating the same taxes for the hemp space, let’s lower the tax in the marijuana space and make it something reasonable.”
Changes brewing?
The word “reasonable” is in the eye of the beholder, of course. Hemp operators making delta-9 THC seem resigned to seeing additional limits on their businesses.
Congress could wade into the matter next year when it updates the Farm Bill – the first time the agricultural law will be revised since it legalized nationwide hemp cultivation in 2018.
Any congressional action on intoxicating hemp products would be an acknowledgement that not all who backed the 2018 Farm Bill anticipated how low-THC cannabis plants could be used.
Sen. Mitch McConnell, a Kentucky Republican who was Senate Majority Leader at the time and was a top driver for hemp legalization, famously misspoke in 2018 and said hemp and marijuana were “two entirely separate plants.”
He called marijuana “an illicit cousin which I choose not to embrace.”
Also caught unawares were state regulators.
Dozens of states have already acted to require intoxicating products from hemp to be regulated and taxed like high-THC marijuana. Some examples:
Michelle Donovan, a Clark Hill cannabis lawyer who practices in Michigan and Texas, said she’s seeing clients selling hemp-derived intoxicants face increasing scrutiny from state regulators.
She pointed out that even if THC products meet the federal definition of hemp, states can exercise oversight of ingestible products sold in their states.
“Although we know that hemp is legal under the (2018) Farm Bill, when you change the composition … it may or may not be considered legal at that point,” Donovan said.
Donovan sees no immediate end to the confusing patchwork of state interpretations on how hemp can be used, and she cautions businesses selling hemp D-9 products through the mail to consider each state’s regulations carefully.
“You might think, ‘Oh, I’ve got a hemp license, I can sell anywhere.’ Oh, but wait a minute. … There’s a lot of steps that you need to go through to make sure you’re in compliance,” she said.
Kristen Nichols can be reached at kristen.nichols@mjbizdaily.com.
You must log in or register to reply here.
Share:
Share
Top