Israel wants to be a little more like Canada.

Prime Minister Binyamin Netanyahu tweeted on Sunday that he will be expunging the criminal records of vast amounts of Israelis who had been caught with cannabis and modelling its budding industry after Canada’s, according to The Jerusalem Post.

“I examined the matter and decided to advance the erasure of criminal records of tens of thousands of Israelis for personal use and possession (of cannabis), something that causes unnecessary suffering to many and is a burden on the courts,” he wrote on the social media site.

“(Justice) Minister (Amir) Ohana began work on the issue and will lead a committee which will include (medical and legal) professionals… to examine introducing the Canadian model to regulate a legal (cannabis) market in Israel.”

Israel has already partially decriminalized marijuana and leverages fines and treatment on offenders instead of turning to criminal prosecution. It also regulates and allows use of the drug for medical purposes.

The country’s Green Party said it was pleased to hear the government would be taking legalization efforts even further. “I think this is something that should have been done a long time ago, and I appreciate the prime minister, who paid attention, met with me, heard me and made the right decision,” party leader Oren Leibovich told The Jerusalem Post.
“Personally, for me, it is about closing a circle,” said Leibovich, who will act in an advisory capacity to the committee. His party, which advocates for the full legalization of the drug, has never won a seat in Parliament.

“I embarked on this struggle exactly 10 years ago and I believe that this week we made a significant step on the path to a legal cannabis market in Israel. I just hope that a government will come into being and we will not have to go through another election, for the fourth time in a row, so that the promise will also be implemented.”
Israel will hold its third general election in the past year next week after the previous two ended in a deadlock. Regardless of what the future holds, Leibovich said the forthcoming expungement efforts are a victory unto itself.

“A criminal record is something that destroys people’s lives for no wrongdoing,” he said. “Over 40,000 citizens can now apply to the justice department and it will be approved. After the election, a committee will be formed to examine how to apply the legalization of cannabis in Israel, similar to Canada’s model.”

Recreational and medical marijuana are both legal in Canada and adults are free to carry up to 30 grams of the drug and grow up to four plants (per household) for personal use.
Cheers

An Israeli cannabis news site, Cannabis Magazine (link in Hebrew), reports that the country’s imports of cannabis have exceeded 6 metric tons. Sure, that’s a lot of weed, but it’s also the first time the country has beat Germany in terms of cannabis imports. But wait, doesn’t Israel produce a lot of cannabis? In fact, the country does have some of the world’s leading research labs and companies investigating cannabis-based medicines and extracts, but that’s meant a shortage overall. The country simply can’t produce enough pot, and that’s led to the increase in imports in the past few years.
Israel can do this, in part, because the country has less stringent rules on marijuana flower imports than other countries. In the European Union, there are a bunch of standards for production, and these rules can cover everything from sourcing raw materials to production to export packaging. In the case of weed coming into Israel, there needn’t be any EU Good Manufacturing Practice certification, so the imports might come from a variety of sources and not the ones Germany is prone to use due to their stringent import controls.
Interestingly, Germany’s import business is brisk but varies from month to month. Thus far the country has relied exclusively on imports for its domestic cannabis markets as domestic production isn’t expected to be available in quantities until the end of 2020. Even so, insurance reimbursement in Germany for medical marijuana has grown, and March saw a spike in sales — although many believe that was due to stockpiling in the face of the pandemic.
What we don’t know is how many Germans are paying out of pocket for weed. That’s because the data doesn’t include those whose insurance carriers paid reimbursements. Still, the Germans are embracing medical pot. They just aren’t being very forthcoming when it comes to reporting how many of its citizens are using it.

Israel, for its part, is hoping to become an exporter of cannabis some day. The country has seen rapid development of technologies around cannabis, from distillates to medicines, and there’s a booming business with cannabis there. Like with many countries, domestic production is a relatively recent phenomenon, and it will take time for growers and producers in general to get their businesses off the ground — and their crops.
Globally, Israel and Germany are likely to be the only markets outside the USA that will see a major amount of marijuana sales. MJBizDaily reports Australia imports a lot of oil, even THC-heavy oil, and most of that apparently comes from Canada. This business has been nearly exponentially growing for the country after it legalized full marijuana use and cultivation. It has become one of the world’s premier exporters of cannabis, and has provided a steady growth industry for the country.

Weed over Tel Aviv
Packets that were dropped from a drone over a main Tel Aviv square and which Israeli police suspect contained cannabis are seen on the ground in Tel Aviv, Israel September 3, 2020. Israel Police/Handout via REUTERS
TEL AVIV (Reuters) - A drone dropped packets of what looked like cannabis over a main square in Tel Aviv on Thursday after activists seeking to legalize the drug in Israel promised free weed from the air on social media.
Police said they arrested two men who operated the quadcopter that flew over Rabin Square, a site often used for street protests and political rallies

“The time has come,” the Green Drone pro-legalization group said on its Telegram web messaging channel. “Is it a bird? Is it a plane? No, it’s the Green Drone sending you free cannabis from the skies.”
In a statement, police said they suspected the baggies were filled with “a dangerous drug” and that officers managed to recover dozens of them. Photos distributed by the police showed what appeared to be cannabis inside.
ADVERTISEMENT

The Maariv news website, which carried photos of the drone dropping the packets, said passersby took some of them before police arrived. Footage showed people walking through busy traffic to pick up packets that had fallen on a road.
Currently, medical use of cannabis is permitted in Israel while recreational use is illegal but largely decriminalized.
In May, Israel gave approval for exports of medical cannabis, paving the way for sales abroad that the government expects to produce hundreds of millions of dollars in revenue. 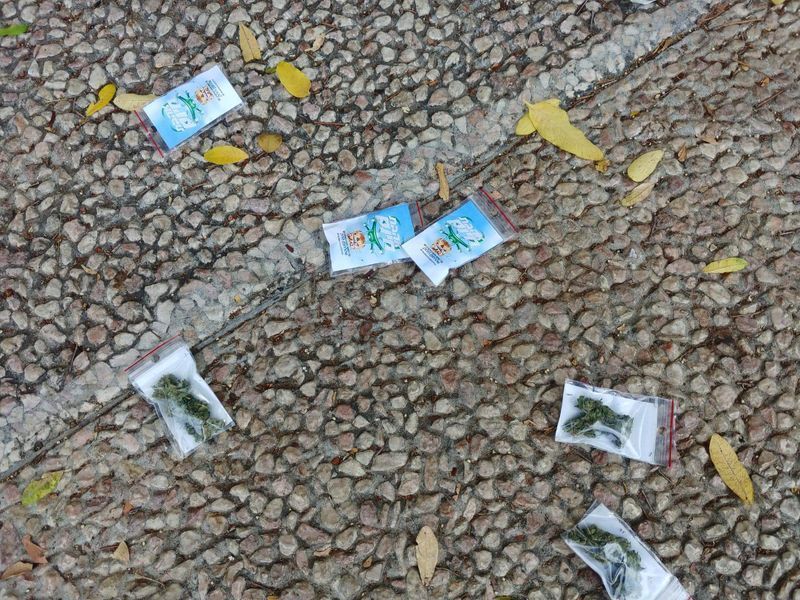 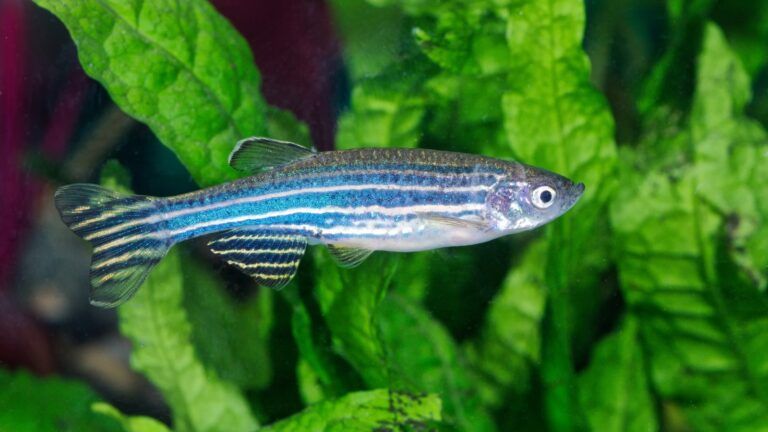 Zebrafish in an aquarium. Photo by Neryxcom via Shutterstock.com

Different strains of cannabis are helpful for treating different medical conditions. Testing each type for its therapeutic potential using mice or people is time-consuming.
Israeli researchers discovered they can speed up the process by using zebrafish.

Camanex, the applied science arm for cannabis of MIGAL Galilee Research Institute, developed the fishy new testing model with Canonic, a subsidiary of computational biology company Evogene.
With the help of the zebrafish model, cannabis companies can perform a preliminary rapid and accurate sorting of medical cannabis strains with potential to treat various indications. They can later analyze exactly which active ingredient is responsible for the therapeutic effect.

The zebrafish system for rapid identification already has been conducted to determine the therapeutic potential of cannabis strains for sleep problems, seizures, Parkinson’s disease and pain. Additional indications to be studied include autism and anxiety.
Why zebrafish? Earlier this year, Bar-Ilan University researchers explained that they carried out sleep research on zebrafish because these creatures’ brain activity isn’t hidden behind a skull, making it easier to monitor. Also, zebrafish have a brain structure similar to ours, only simpler.

Camanex and Canonic work together from the stage of cultivating varieties in greenhouses to the work in the laboratory. Their accumulated knowledge is expected to contribute to the development of strains that have clear capabilities for various medical indications as well as strains with high commercial potential.
Canonic contributes Evogene’s technology, which provides genomic information on the plants, in developing targeted cannabis strains.

Bar Nevo, CEO of Camanex, added, “Today we know how to map the medical implications of the same varieties from the cultivation companies in Israel and around the world quickly and economically for investors

Israel to legalize recreational cannabis use​

Minister of Justice Avi Nissenkorn has announced that he will promote the legalization of recreational cannabis use in Israel. From age 21, people will be allowed to use cannabis at home and at special stores. Allowing cannabis use in public places will be examined at a later stage.


Nissenkorn has adopted the conclusions of an inter-ministerial team that was set up to examine reform of the law on cannabis use, headed by Deputy Attorney General Amit Marari. According to Nissenkorn, the government-sponsored legislation will be completed within nine months.


The inter-ministerial committee recommends that the state should introduce regulations to ensure that prices are reasonable, so that users will not buy cannabis on the black market. It also recommends that, alongside the legislation, the state should invest in education, information campaigns, budgeting of addiction programs, and enforcement against those who breach the conditions for using cannabis, as well as continued research to determine whether the steps taken are adequate and advise on changes.


"There is a majority and general consent in favor of making progress on this matter for the benefit of the Israeli public. The time has come to move ahead in a responsible manner and to find the balance between an individual's right to use cannabis and the other considerations," Nissenkorn said.


"We reached the conclusion that with responsible and precise regulation it is possible to allay the fears associated with cannabis use," said Marari. "It is right to prefer regulation to decriminalization. De-criminalization does not provide an answer to fears such as of contact with the black market."


Until legislation is passed, there is no intention of changing the status quo, which means that fines will continue to be imposed even after the announcement of impending change. So far in 2020, the number of fines imposed for cannnabis use has risen by 58%.
Cheers