Introduction
Marijuana is typically consumed by burning ground flower, top leaves or bud (marijuana) in a filter-less cigarette or joint with or without tobacco and inhaling its smoke.Table 1. Current marijuana users were more likely to be younger, white, and male than never users. They were also more likely to be current tobacco smokers and have less severe COPD. Joint years were significantly higher in current compared to former marijuana users, but there was a wide range in each group. BMI was significantly higher for former marijuana users when compared to never users. 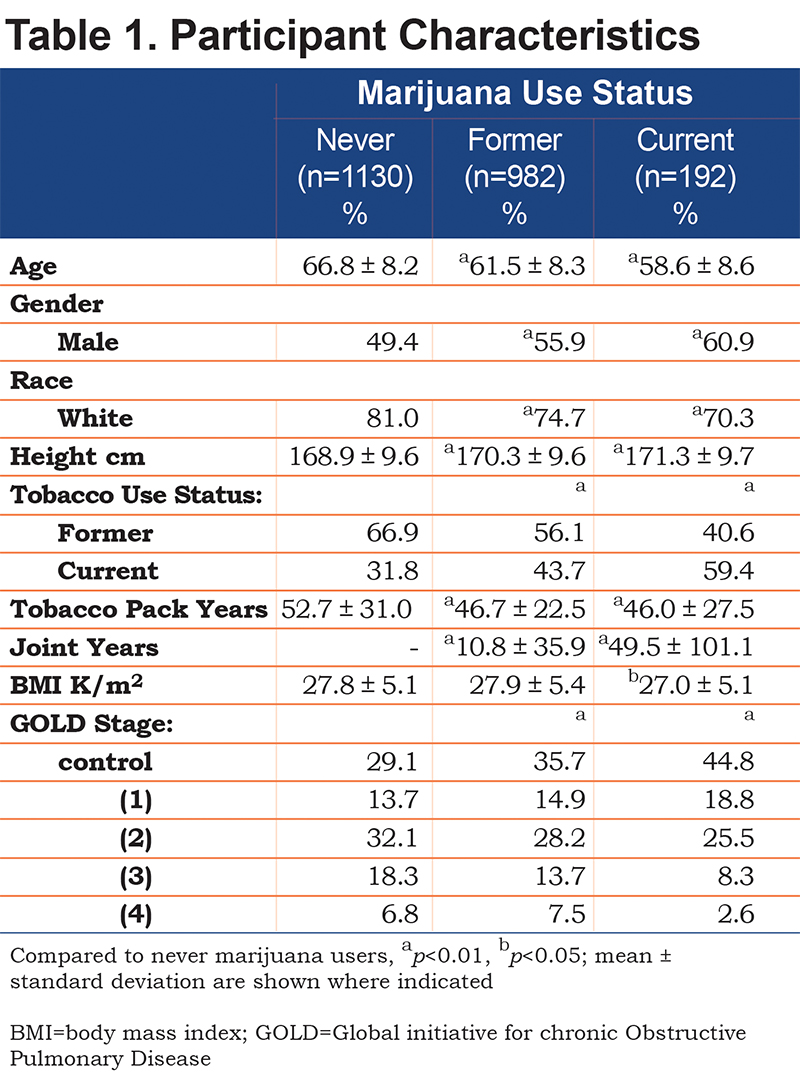 Respiratory Symptoms
Neither current nor former marijuana use was associated with increased risk for cough, wheeze, or chronic bronchitis when compared to never marijuana users after adjusting for covariates (Figure 1). 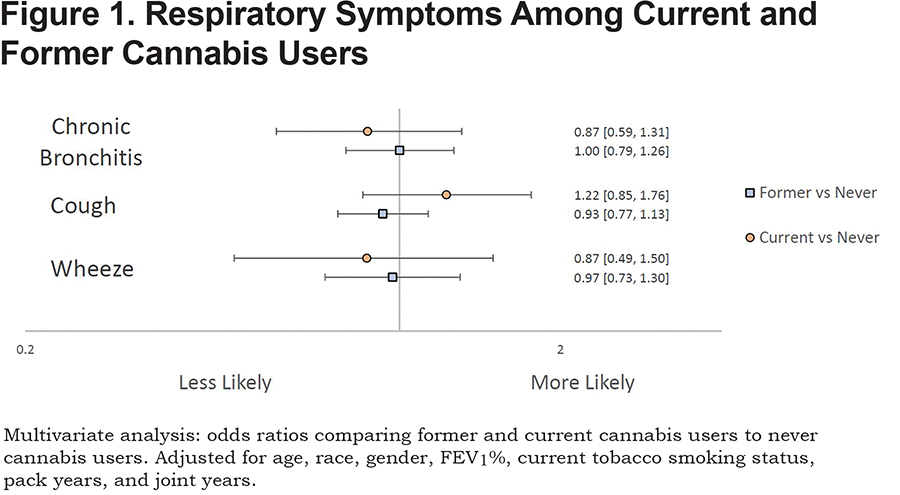 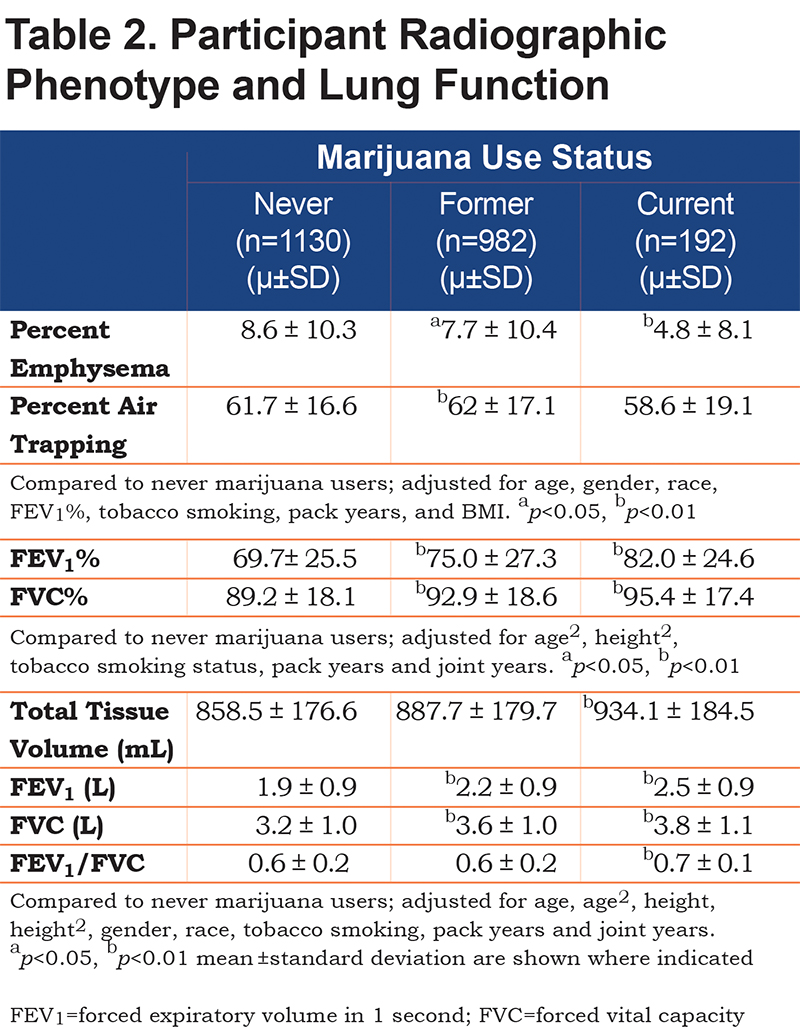 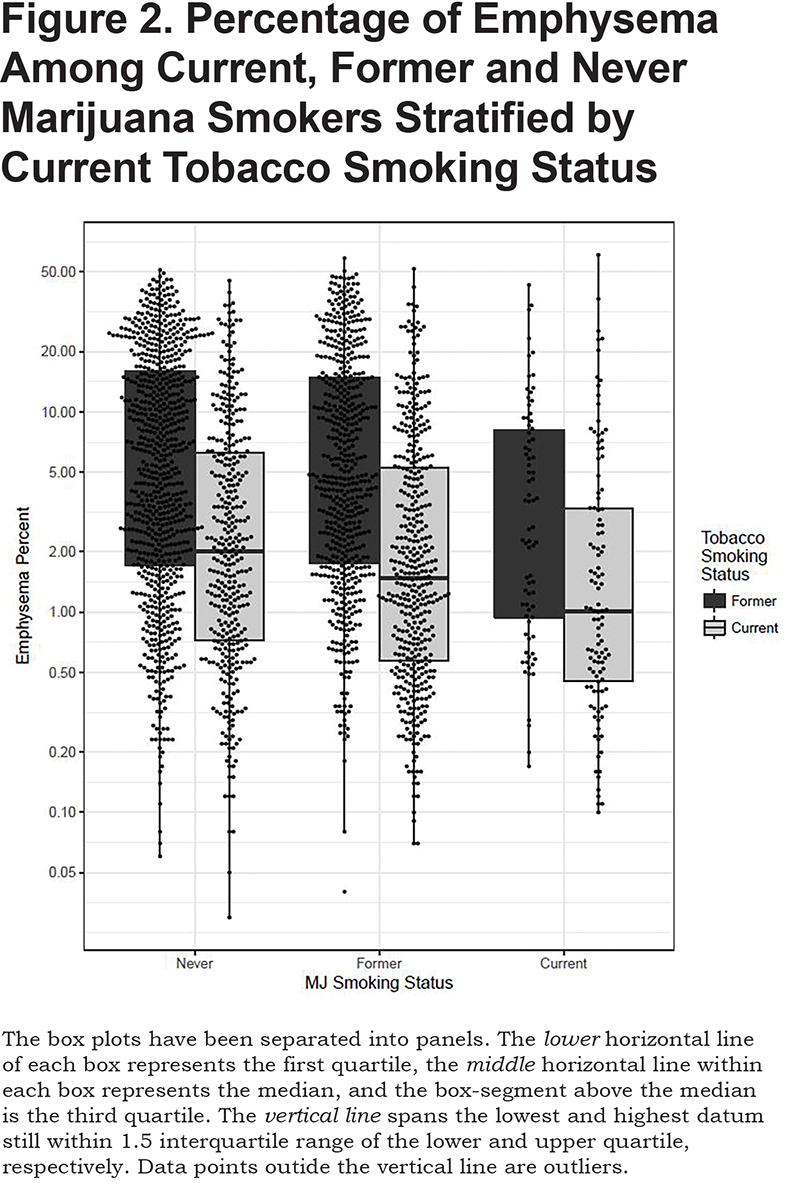 Discussion
This cross-sectional analysis of the association of marijuana history with measures of lung health is one of the first12to include predominantly older adults and one of only a few studies that included a quantitative assessment of emphysema using CT scans.6,13 It is notable that nearly half (49%) of the SPIROMICS cohort reported a history of marijuana smoking, although only 7% were considered active smokers. Similar to previously published studies, we find that marijuana smokers were more likely to be male and younger than non-users.18,19 Evidence for increase of cough, wheeze, and bronchitis among marijuana users varies in previously published studies6-8,12,20; however most show an increase in symptoms of chronic bronchitis in association with marijuana use.5-9,20,21 We did not find that a history of marijuana use is associated with more wheezing, coughing, or bronchitis even after considering tobacco cigarette smoking. We did, however, find an increase in reported wheeze among those with a history of greater than 10 and 20 joint years. In agreement with other published studies,6,7,12,21,22 we also did not find that marijuana use was associated with more obstructive lung disease, but instead found an association between marijuana use and a higher FEV111 and FVC.10-12,23

Although not all published studies are in agreement, one of the more consistent lung function findings in marijuana literature is a higher FVC.10-12,22 While the mechanism for this is not clear, it could include deeper breathing of marijuana users.2,23 If FEV1 is held constant, a higher FVC would be expected to be associated with a lower FEV1/FVC, which could result in classification as mild obstruction. Interaction between marijuana and tobacco shows conflicting results; while one study found a synergistic effect of marijuana and tobacco such that marijuana when smoked along with tobacco augmented the impact of tobacco on the prevalence of COPD,12 there is opposing evidence to suggest that the effect of marijuana is to reduce the effect of tobacco on adverse pulmonary function.6 In SPIROMICS, lung function among combined tobacco and marijuana users was lower compared to non-smokers of either substance after adjusting for covariates. These results should be interpreted with caution since in this population, adults who have quit smoking tobacco or marijuana likely did so because of poorer health.

There are also case series reporting lung bullae formation in marijuana smokers.23,24 While Aldington et al noted significantly greater lung attenuation in lung slices at the apices on CT scans in marijuana smokers derived from a random sample of residents of Wellington, New Zealand, they showed no significant increase of macroscopic emphysema on CT in their marijuana smokers.6 In agreement with these findings, our study found no evidence for increased extent of quantitatively scored emphysema in marijuana users nor any evidence of bullae.6,25

There are limitations to the interpretation of the results from this study. Mainly, this population is non-random and was recruited based on tobacco smoking history. Although we adjusted for tobacco use and excluded never tobacco smokers, it is still unclear if long-term heavy marijuana smoking results in significant risk of respiratory symptoms, lung obstruction, inflammation, or emphysema. The strong associations between tobacco smoking and adverse respiratory health may be masking effects of marijuana use. However, contemporaneous to the legalization of marijuana in many states, there has also been an exponential increase in the potency of tetrahydrocannabinol (THC) in marijuana from 3% to now 30% or more. Thus, marijuana smoke exposure should be expected to decrease as potency increases since users would need to smoke less to achieve the desired level of intoxication. Moreover, there may be fewer individuals who have heavy marijuana smoking exposure, unlike many tobacco smokers for whom it is not uncommon to smoke 40-60 cigarettes per day. Another limitation is that marijuana was an illegal, schedule 1 substance in most of the United States at the time our participants were recruited. This may have biased against honest disclosure of marijuana use. Additionally, marijuana exposure can be more difficult to quantify because of sharing, differences in dosing and inhalation techniques, and methods to consume or use marijuana (e.g., vaping, dabbing, edibles). These newer methods of exposure may not have been fully quantified in the SPIROMICS cohort; however, the advanced age of the cohort suggests that smoking was the predominant marijuana delivery method.18,19 The analyses presented here adjust for joint years. It is difficult to quantify joint years since one joint or bowl is not universally comparable. This may explain why joint years was not shown to be a predictive covariate in any of our statistical models of current marijuana use status and pulmonary outcomes. Finally, marijuana and its effect on lung function was not the primary aim of the SPIROMICS study and there were only 192 active users. Although these results were able to detect differences in lung function and phenotypes among marijuana use groups, these results are not generalizable to a healthy adult population. There may be no to little increased risk of marijuana use for a further increase in respiratory symptoms or adverse effects on lung function among those with a history of concomitant tobacco use.

Conclusion
This cross-sectional analysis of participants enrolled into the SPIROMICs cohort was performed to investigate the relationships between marijuana use and pulmonary function and symptoms. Those enrolled were carefully screened and recruited based on tobacco use history and spirometric function and therefore, do not represent a random population of adults. Additionally, those included in this analysis reported >20 pack-year history of tobacco use. The relationships we found between tobacco use and pulmonary outcomes agree with a large body of research on the adverse pulmonary consequences of tobacco smoking (results not reported here). In contrast to tobacco smoking exposure, the illegality of marijuana use, up until recent years in select geographic areas, has made it a difficult target of epidemiologic observation. This study collected usage information on marijuana and reports on prevalence and associations of marijuana use among an older adult population with a history of heavy smoking, and lung health outcomes.

Previously reported findings of marijuana and pulmonary symptoms have led to conflicting conclusions. Our results indicate increased FEV1 and FVC among current and former users of marijuana even after controlling for other predictive variables. Evidence for a decreased ratio of FEV1/FVC with marijuana use has been supported 8,9,26,27 but could be due to an increased FVC.9,26,27 This study also revealed a lower percentage of emphysema, yet a higher total tissue volume among current and former marijuana users and a higher percentage of air trapping among former users after adjustment for covariates. Percentage of emphysema and total tissue volume are inversely related; increased inflammation could explain these associations in our population. Analyses of an interaction between marijuana and tobacco smoking revealed increases in FEV1 and FVC among those who used marijuana only, tobacco only, and both marijuana and tobacco. These results are likely heavily biased and should be interpreted with caution. Those who quit smoking tobacco likely did so because of poorer health; contrary to those who continued to smoke tobacco. Among older adults with a history of tobacco use, marijuana use does not appear to increase risk for adverse lung function. It is necessary to collect more epidemiologic data on marijuana exposure in a broader population to better understand its health consequences.