Meds The Dangers of PRG Weed

The Dangers of PRG Weed and How to Identify it​

Plant Growth Regulators (PGRs) sound benign enough, but PRG weed should strike fear into the heart of every cannabis consumer. Sure, you’ve heard about the dangers of pesticides, fungicides, and heavy metal contamination in your bud, but now there is another chemical risk in the cannabis sector.

PGR weed is a relatively new concept in cannabis. Fuelled by the drive for bigger yields and bigger buds, some farmers are cutting corners by spraying their cannabis crop with harmful PGRs. If you are already concerned about other chemicals in your cannabis, you’ll want to know about PGR weed as well.

Back in the 1930s, American farmers were in the midst of a chemical revolution. During this time, the American agricultural sector adopted synthetic chemicals wholeheartedly, such as fertilizers, pesticides, fungicides, and more.

Part of this was discovering a new type of chemical application, now called plant hormones, plant growth regulators, or growth regulators. Initially used on pineapples to improve flower production, farmers quickly adopted them across many other crops.

Plant growth regulators are applied to crops and other vegetation to control their growth in a highly specific manner. For cannabis, it means growing bushier plants, denser buds, or bigger yields. Outside cannabis, it might also be sprayed to keep trees short under hydro lines, preserve the storage life of produce and many more applications.

The official definition is that PGRs “Are chemicals used to alter the growth of a plant or plant part. Hormones are substances naturally produced by plants that control normal plant functions, such as root growth, fruit set and drop, growth and other development processes.”

Although cultivators indiscriminately used PGRs for most of the 20th century, they are now highly regulated, and some outright banned.

The 3 Most common PGR’s​

Unfortunately, the prevalence of PGRs in weed is unknown. Because large parts of the cannabis industry still operate in the black market, there is no way of telling what PGRs are sprayed and how many cultivators use them.

Most alarmingly, most of the time, cultivation chemicals for cannabis don’t have to list their ingredients. You can still purchase many PGRs at hydroponics stores and online. If you read the label, you might not even know there are PGRs in your products.

A good rule of thumb: if your nutrients promise unbelievable returns and no ingredient listing, you could have a PGR on your hands.

As per the University of Florida’s Department of Agriculture, chemists originally developed for ornamental plants. When applied, it inhibits growth. When it comes to cannabis, this is useful for indoor hydroponic systems where space is at a premium.

There are three common trade names it goes under, B-Nine, Compress, and Dazide, but for PGR weed, it may go under others. When used during cannabis cultivation, it may help control the plant’s physical features, but it also reduces the terpene and cannabinoid production.

Way back in 1989, the US Environmental Protection Agency (EPA) banned daminozide on all food-applications. Daminozide was banned because it caused tumor growth in lab animals. Based on a 12-month study, the EPA determined this chemical was carcinogenic, meaning cancer-causing. In their 1989 announcement, the EPA predicts “that lifetime dietary exposure to this product may result in an unacceptable risk to public health.”

Most jurisdictions classify chlormequat chloride as a hazardous substance.Accidental exposure, either by inhalation or absorption through the skin, may lead to skin, nose, and throat irritations. Nausea and vomiting are also common. Long term exposure may cause pulmonary edema.

Unfortunately, most testing is still underway, which means chlormequat chloride is still widely used across all agricultural sectors, including cannabis.

Paclobutrazol has several agricultural applications, including for ornamental plants and trees, turfgrass, and cannabis. It promotes uniform flowering and increases the thickness of vegetative growth while also inhibiting growth. In cannabis, it improves bud uniformity while keeping the plants short and stocky, which is why some hydroponics growers love it.

Unfortunately, this PGR inhibits more than just physical growth. Paclobutrazol prevents plants from producing a normal terpenes and cannabinoid profile. Even if the final bud looks familiar, it will be far less potent and tasty than you’d see you’ would get with the same untreated plant.

Although not banned in most places, recent studies demonstrate this chemical has several toxic effects. It reduces antioxidant activity in the brain. It damages the reproductive cycle of lab rats and reduces the survival rates of lab rat litters.

How to Spot PGR Weed?​ 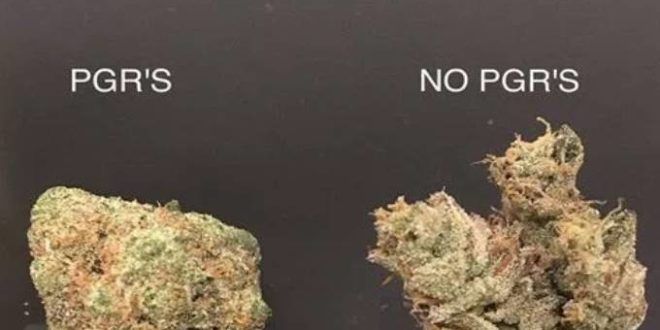 Thankfully, unlike other pesticides that don’t create alarming visual signs, PGR weed tends to stand out. In a side by side comparison, PGR weed looks drastically different than an all-natural organic nug.

The buds of plants sprayed with these chemical hormones tend to look like tightly packed hairballs and not beautiful crystal covered weed.

The more PGR hormones the cultivator decided to apply, the more apparent the signs. As you inspect your new batch of bud, keep a lookout for the following:

How Dangerous is PGR Weed?​

There are several major concerns related to PGRs in consumables. However, many PGRs (even beyond those highlighted above) are used widely across the agricultural sector, from cereal grains to vegetables to indoor cannabis cultivation.

With dozens of different PGRs currently deployed across the fields and greenhouses of North America, not all of them have gotten the attention they deserve from scientists. As two such examples, chlormequat chloride and paclobutrazol, are already known for their toxic effects, but the research is still preliminary. Taking research out of the laboratory and into long term, controlled studies among people is very challenging.

Incredibly, even when some PGRs are banned (like daminozide), these are only restricted for traditional food crops. Cannabis is not a foodstuff, and therefore often slips through the cracks.

How does the human body react to Daminozide when inhaled? Is it different than when eaten? There are many concerns and few answers.

In cannabis, there are two dangers from PGRs:

From what we know thus far, immediate exposure to a PGR by accident may trigger irritations, respiratory distress, nausea, vomiting, and other acute conditions.

But for you, the smoker, what are your risks should you keep smoking PGR weed?

What are the Natural Alternatives to PGR Weed?​

Plant growth regulators make it easy to grow bountiful buds. It’s like a secret cheat code for cultivators. But are there ways to inhibit or otherwise manipulate the plant without turning to these harsh chemicals?

Plant growth hormones do occur naturally across the plant kingdom. If you can harness these, then you can avoid the use of synthetics.

To date, these are still undergoing extensive research, even by the likes of NASA. However, growers can find these natural compounds with PGR-like qualities popping up online and at hydroponic centers.

Another way to avoid synthetic PGRs in hydroponics is to recirculate your nutrient solution continuously. Instead of discarding after a few weeks or months, that means circulating it through multiple grows for a year or more.

As each harvest grows, they will naturally release their PGRS through the root system. These natural compounds build up in the nutrient solution for bigger, better grows. A technical approach, but one which is reportedly beneficial.

Growers may love PGRs for their ability to manipulate the plant into a more desirable shape, with bigger yields. But unfortunately, this is cheating and creates a drastically inferior product. Even if the buds turn out visually appealing (not hairballs), they are far less cannabinoid and terpene-rich. Yes, the crop is bountiful and may weigh more (which is good for profits), but the quality isn’t anything near what you’d get in a chemical-free grow.

The other serious concern is the health risks associated with using PGRs in the grow room and smoking PGR weed. Immediate exposure risks acute health concerns, and long term inhaled exposure may damage the reproductive cycle, prenatal health, antioxidant capacity of the brain, and more.

The concerns about PGR weed are legitimate among smokers and cultivators. Keep your eye out for dark orange and dull-orange hairball buds with a spongy interior. With so much legal and lab-tested cannabis available, there is no reason to risk your health on PRG weed.

Any chance these chemicals can be scrubbed with carbon and celite in tincture form?
I suspect I have had a bit of this kind of cannabis
Who am I, why am I here? - Admiral Stockdale

Tincandtoke said:
Any chance these chemicals can be scrubbed with carbon and celite in tincture form?
I suspect I have had a bit of this kind of cannabis
Click to expand...

This is primarily an Aussie black market thing, no...? 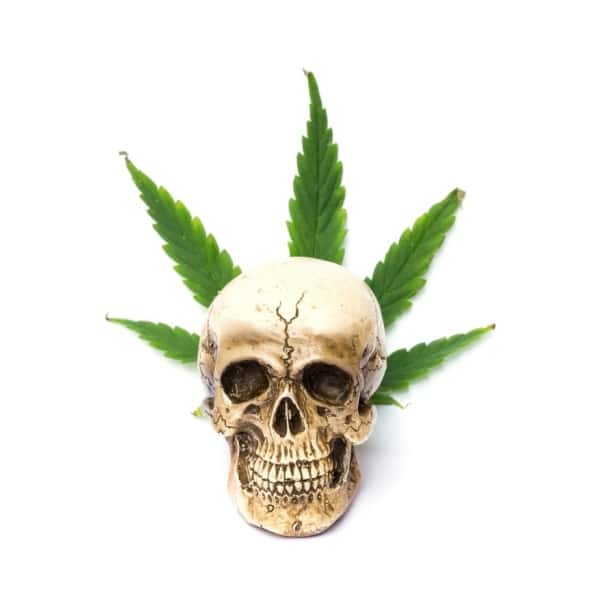 Cannabis (weed, marijuana, etc.) and plant growth regulators (PGR) are in the spotlight due to their potentially harmful effects on human consumption in Australia. PGR nutrients may produce harmful chemicals in your weed. 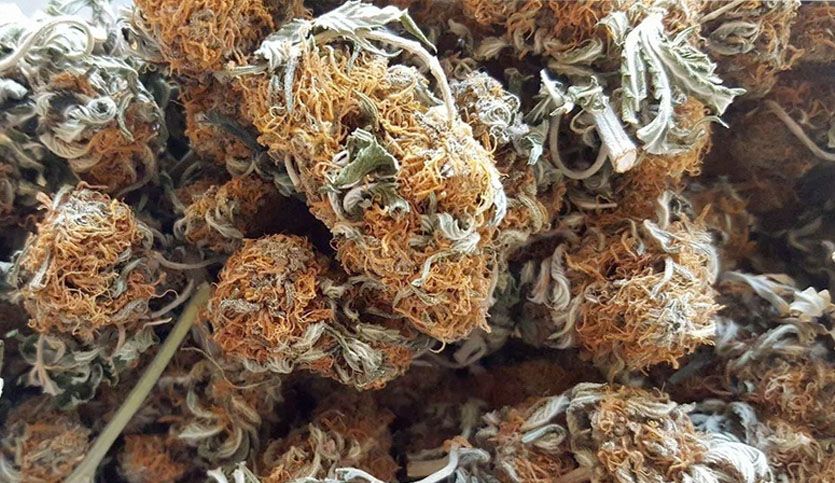 PGR cannabis: what is a plant growth regulator? | BudHerd

PGR or plant growth regulator grown cannabis contain toxic chemicals which are harmful to humans. We explain how PGRs effect the cannabis plant and how to visually identify PGR grown buds.