Staff member
Omg... these look even better than the real thing! If you can't get the medicated chocolate (Defonce) that they are using, any medicated chocolate would work. If you do not have that available, adding some cannaoil or cannabutter to some chocolate while melting would do the same thing. Or as they recommend, you can just brush the top with cannabutter. 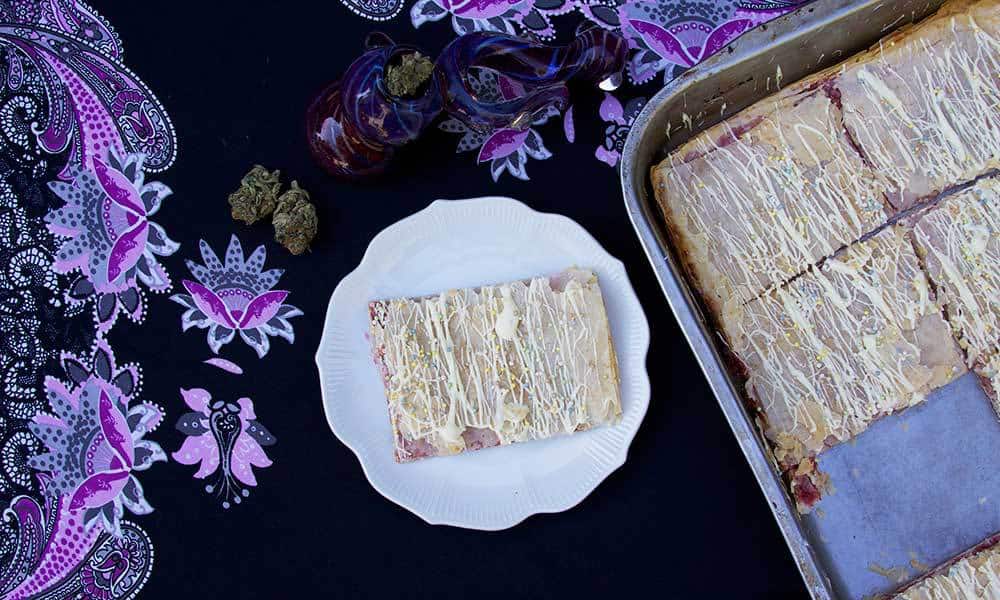 Inspired by the nostalgic flavors of a raspberry Pop Tart, these easy toasted pot pastries come together quickly. Don’t let yourself get intimidated by the phyllo dough—it makes the resulting treat flaky and buttery, with an elegant grown-up twist on a classic favorite.

Created by the weed lovers at Prohbtd for their “Smoking Pot” video recipe series, this recipe involves making a fresh raspberry sauce with a splash of lemon and then spreading it between buttery sheets of thin dough. Using Défoncé white chocolate to drizzle over the top adds another layer of THC, but if you’re not able to source the cannabis-infused white chocolate, you can brush the phyllo with cannabutter instead.

Toasted Pot Pastries: Ingredients
Toasted Pot Pastries: Directions
If the phyllo dough is frozen, start by defrosting the sheets according to the package instructions. Once defrosted, place the raspberries in a small pot and then add the sugar and a dash of vanilla extract, followed by a half-teaspoon of butter and a squeeze of lemon. Bring the ingredients to a boil, stirring to blend. Cook for 10 minutes, until reduced and thickened. Turn off the heat and set aside.

Melt the butter together with the cannabutter and put in a small bowl. Place a sheet of phyllo dough on a baking pan and brush the top of the sheet with melted butter. Now, place another sheet on top and brush with butter again. Repeat until you have five layers with brushed butter between each phyllo sheet.

Spread the raspberry mixture across the top phyllo sheet, leaving a one-inch border (with no raspberry jam) around the sides. Now add five more phyllo sheets, brushing each one with butter before adding the next layer.

Preheat the oven to 400°F. Put the pan into the oven and bake for 12 to 15 minutes, or until the pot tarts are golden brown. Remove the pan from the oven and let it cool. Now cut the pastry into eight pieces using a knife or pizza cutter. Melt and drizzle the Défoncé white chocolate across the top of the pot tarts, and add sprinkles or any other garnish of your choice. Serves eight.

A note on dosage: Each bar of Défoncé white chocolate contains 180 milligrams of THC in 18 pieces with 10 mg each. Melt and drizzle four chocolate pieces for five mg per pot tart; eight pieces for 10 mg; 12 pieces for 15 mg; and so forth.

Properly store and label any leftover chocolate and/or toasted pot pastries to avoid mishaps. Enjoy!
You must log in or register to reply here.
Share:
Share
Top