I eat at 2 am with the munchies like zombies who got into a morgue! LOL I would love for someone to breed cannabis without the munchies.

Anyone who’s ever done a bong rip or read old scientific studies on weed knows that marijuana gives you the munchies, but nobody is really sure why it does. A new study being presented this week at the Society for the Study of Ingestive Behavior, however, lays out a biological explanation that might not only solve this long-standing mystery but also create a new avenue for access to medical marijuana.

The science of munchies isn’t just about understanding why stoners love to snack. The effect marijuana has on hunger has huge implications for cancer patients, who use the drug to stimulate a much-needed appetite. These days, patients figure out by trial and error what strains help them the, recover their appetite best, but there hasn’t been any confirmed science to guide them. Jon Davis, Ph.D., the lead author of this study and an assistant professor at Washington State University, explains to Inverse that this is because medical marijuana is “an area where policy has moved a lot faster than the science.” Fortunately, the science is finally catching up.

“We have little scientific evidence for why marijuana can stimulate appetite, but we have many states where marijuana is legal and it’s primary medicinal use is to stimulate appetite and reduce stress,” says Davis. “Now, I think that this new study indicates that there’s an opportunity to use science to backup the policy of using marijuana as a medicinal drug.”

Davis’ paper, which is currently under review, shows that cannabis consumption influences appetite by triggering the release of a hunger hormone called ghrelin. Ghrelin is usually released by the stomach when it is empty, signaling to the brain that it’s time to eat. But in a study on rats, Davis and his team showed that a cannabis dose causes the release of a surge of ghrelin that’s greater than normal. This didn’t happen when the rats were given a drug to prevent the ghrelin surge, confirming that the cannabis had triggered it.

The cannabis-induced ghrelin surge, however, resulted in a very specific eating pattern, which the researchers discovered by experimenting on three groups of rats. Each group was raised on a different diet: A normal one in which they could eat whenever they wanted, one in which they ate enough to be stuffed, and another in which the rats were starved for 48 hours.

Despite their different diets, rats in all of the groups began to eat frequent, small meals two hours after their cage was filled with controlled doses of marijuana vapor (the design was based on clinical studies showing that the majority of medical marijuana consumers use vapes). This was true of the fat rats who seemingly couldn’t eat anymore and true of the starved rats, who even switched from rapidly consuming food to snacking every two hours. While the rats in the control group who’d had their fill went on with their day, the stoned rats kept on eating.

“That was pretty powerful to us,” says Davis, “It showed us, okay, this is getting really close to what it would be look like for a patient who hasn’t been able to eat and lost a lot of body weight.” He is “cautiously optimistic” that a similar study would induce the same results in humans. 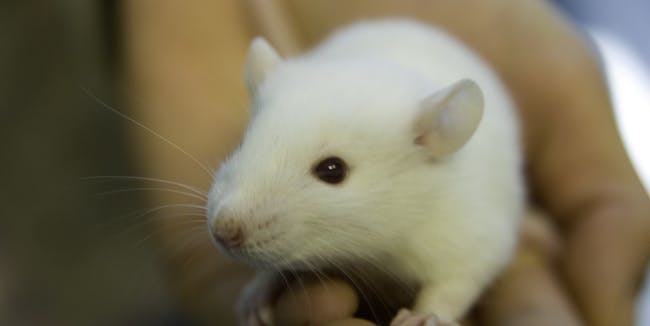 Part of the difficulty in studying the effect of marijuana on human appetite is that access to marijuana of different concentrations of THC — one of the psychoactive compounds in the plant — is limited. As a researcher, Davis only has access to marijuana grown at the University of Mississippi, which has an extremely low THCconcentration of about 7.8 percent. Comparatively, in Washington State people can legally buy marijuana with THC concentrations closer to 24 to 30 percent. This makes it hard to do research that’s actually applicable to real-life users of marijuana.

“Something that we want to pursue in my lab is seeing whether the effect of THC concentrations could cause different results — meaning, maybe they would eat a little sooner or delay feeding a little longer,” says Davis. “Having said that, I’m absolutely confident that when people are going to inhale or vaporize marijuana, they are going to have an increase in appetite.”

Moving forward, says Davis, his lab will study how the animal brains — specifically the hypothalamus — adapt when exposed to vaporized cannabis. His team recently developed a technique, similar to a MRI, that allows them to “look into an animal’s brain while it’s alive and moving, second by second.”

He also wants to continue to study the two-hour delay between vape exposure and the munchies. Animals and people first become oriented to the euphoric property of the drug, he hypothesizes, and it takes two hours for their concentration to shift elsewhere. Two hours later, it’s chow time.

“If we can figure out this delay, we can perhaps figure out how to not only stimulate appetite, but determine how to inhibit it as well,” says Davis. “If we can understand the neurobiology of that, then maybe we can figure out ways to help people who have feeding pathologies, like obesity and binge eating.”
Cheers

This could be easily studied in humans, which is who we're interested in.

Haven't had munchies in decades. Figured it was a quickly tolerated effect.

Staff member
I get shocking cases of the munchies. If it was not for cannabis I would rarely eat any chocolate & the like. In fact I am sitting here with the munchies & am thinking about getting a curry pie from the bakery 50 meters away........
Daily drivers: Mighty, assorted VapCaps, Wood Scents #29
Grinders: SLX 2.0, New Vape fine
Glass bubblers: SOL lace perc sidecar, Mike Shea showerhead sidecar, Mad Dabbler lattice perc, Sheldon Black

In a BLACK HOLE!

Stevenski said:
I get shocking cases of the munchies. If it was not for cannabis I would rarely eat any chocolate & the like. In fact I am sitting here with the munchies & am thinking about getting a curry pie from the bakery 50 meters away........
Click to expand...

9.752345 at present. (OG ocean grown)
My GonG is full and I love it!
Had a big large huge lunch.
Epresso & more OG 2B CIVILIZED
POP-CORN!
You must log in or register to reply here.
Share:
Share
Top