A Place to post jokes and other amusing storys.

A man boarded an airplane and took his seat. As he settled in, he glanced up

and saw the most beautiful woman boarding the plane.


He soon realized she was heading straight towards his seat.


As fate would have it, she took the seat right beside his.


Eager to strike up a conversation, he blurted out,"Business trip or

She turned, smiled and said, "Business. I'm going to the Annual

Nympho-maniacs of America Convention in Boston."


Here was the most gorgeous woman he had ever seen sitting next to him, and

she was going to a meeting of nymphomaniacs.


Struggling to maintain his composure, he calmly asked, "What's your business

role at this convention?"

debunk some of the popular myths about sexuality."


"And what kind of myths are there?"

"Well, she explained, "One popular myth is that African-American men are the

most well-endowed of all men, when in fact it is the Native American Indian

who is most likely to possess that trait."


"Another popular myth is that Frenchmen are the best lovers, when actually

it is men of Jewish descent who are the best."

she said, "I shouldn't really be discussing all of this with you. I don't

even know your name.."


"Tonto Goldstein, but my friends call me Bubba." 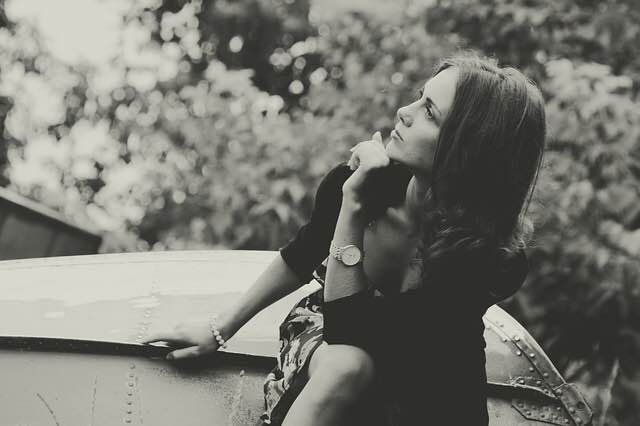 After a few hours of fishing, a husband came back home and decided to take a nap. Even though his wife was not familiar with the lake, she still decided to take the boat out. After she went a short distance, she anchored the boat and started reading her book.

A Game Warden came near in his boat, pulled alongside and wished her a good morning, asking her what she was doing.

She answered that she was reading a book, which was totally obvious.

The man informed her that she was in a restricted fishing area.

She apologized, explaining that she had not been fishing, but reading.

The man told her that she had all the equipment, which meant that she could have started it any moment. Because of that, he had to take her in and write her up.

The woman said that if he did that, she would charge him with sexual assault.

The game warden said that that would be absurd because he had not even touched her.

The woman, still, replied that he could start that at any moment, because he had all the equipment.

" globalism’s
presupposition
is its war on all
distinctions "

A Texan went up to the airline check-in counter and boomed, "howdy, ma'am. My name's Brown, spelled B-R-O-W-N. Ah'm from Dallas, Texas. Ah'm 6-foot 3-inches tall. Ah'm white from th' top of mah head to th' tip of mah toes, and I hate the Irish."

Well, she didn't know what else to do, so she took his ticket and showed him onto the plane.

The little fellow turned to him, "well now, how d'ye do. My name is Patrick Michael O'Donnell. I'm from Dublin, Ireland. I'm 5-foot 6-inches tall, and I'm white from the top o' me head to the tip o' me toes, except for me rectum, which is brown. Spelled B-R-O-W-N." 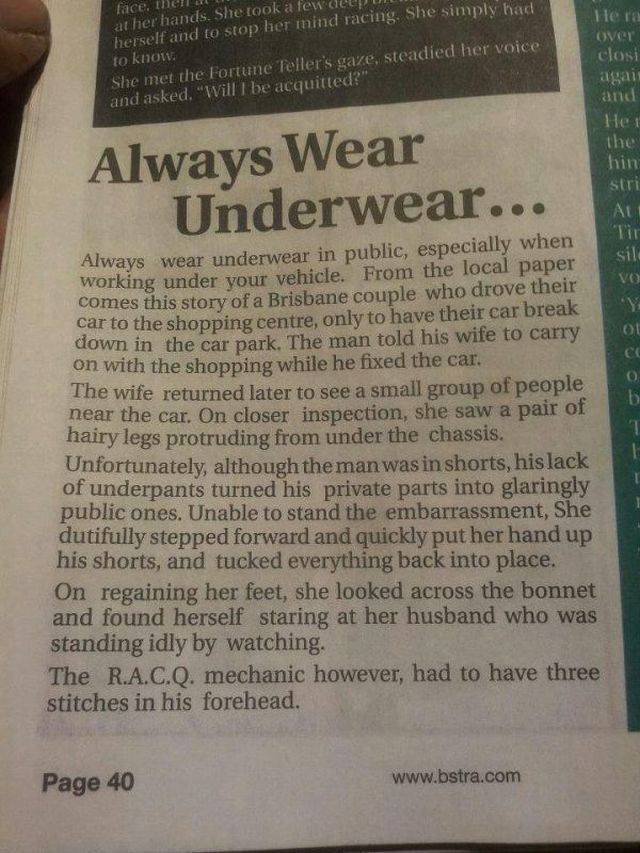 Why was the blonde snorting Sweet and Low?

She thought it was diet coke.
" globalism’s
presupposition
is its war on all
distinctions "

At the end of the tax year the Tax Office sent an inspector to audit the books of the synagogue. While he was checking the books, he turned to the rabbi and said:

"I notice you buy a lot of candles. What do you do with all the candle drippings?"

"We save them up and send them back to
the candle makers and every now and then they send us a free box of candles."

"Oh," replied the auditor, somewhat disappointed that his unusual question had a practical answer.

But, on he went in his obnoxious way.

"What about all those matzo purchases? What do you do with all the crumbs?"

"Ah, yes," replied the rabbi, realizing that the inspector was trying to trap him with unanswerable questions.

"We collect them and send them back to the manufacturers and every so often they send us a free box of matzo balls."

"I see," replied the auditor, thinking hard about how he could fluster the know-it-all Rabbi.

"Well Rabbi," he went on," what do you do with all the leftover foreskins from the circumcisions you perform?"

"Here, too, we do not waste," answered the Rabbi. "What we do is save up all the foreskins and send them to the Tax Office, and about once a year they send us a complete dick." 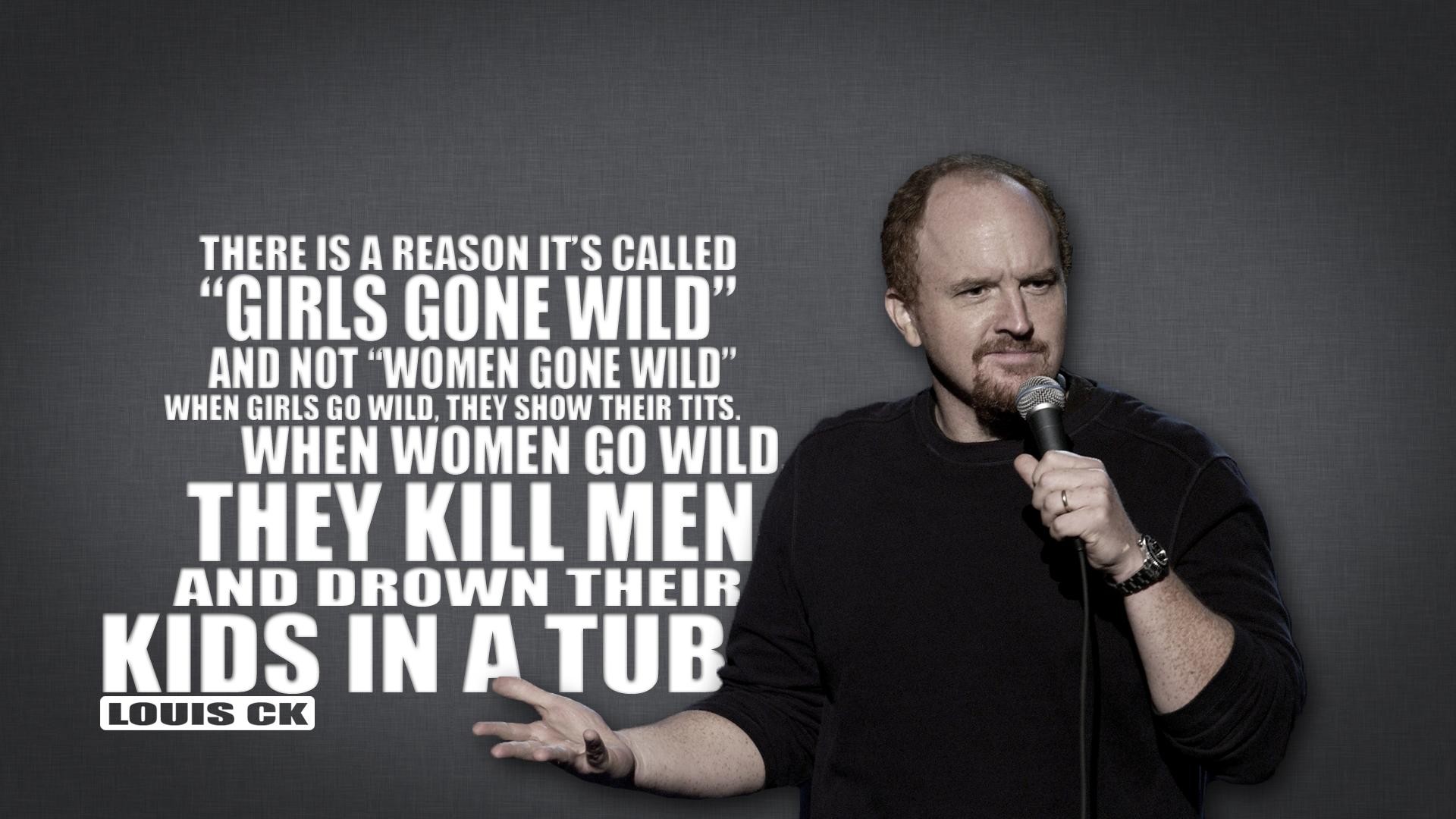 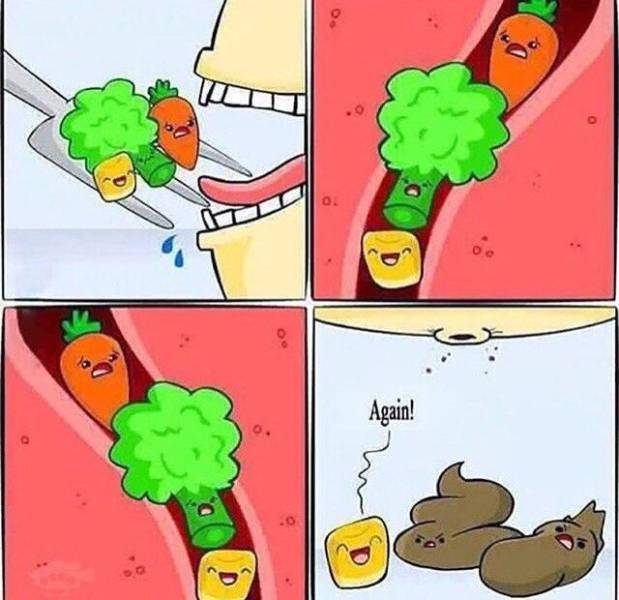 A penguin was driving through Vegas when suddenly his car stopped working so he had it towed to the nearest mechanic.
When he got there the mechanic told him it could take an hour or two to find out what is wrong with his car. The penguin was getting hot so he asked the mechanic where he could cool down.
The mechanic reply "there is an ice cream parlor a few blocks up the street" so the penguin thanked him and waddled up to the parlor. When he got there he ordered the biggest cup of vanilla ice cream they had.
After awhile of enjoying his ice cream he started to head back to the mechanic. When he got back the mechanic said "Hey it looks like you blew a seal" then the penguin shouted "No no! It's just vanilla ice cream!" 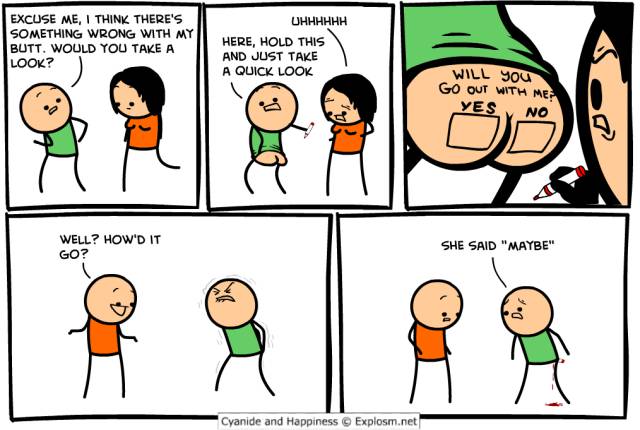 Baby bear goes downstairs, sits in his small chair at the table. He looks into his small bowl. It's empty. 'Who's been eating my porridge?' he squeaks.

Daddy Bear arrives at the big table and sits in his big chair. He looks into his big bowl and it's also empty. 'Who's been eating my porridge?!?' he roars.

'It was Mummy Bear who walked the bloody dog, cleaned the cat's litter tray, gave them their food, and refilled their water.

'And now that you've decided to drag your sorry bear-arses downstairs and grace Mummy Bear with your grumpy presence, listen carefully, because I'm only going to say this once....

'I HAVEN'T MADE THE EFFING PORRIDGE YET!

Once years ago, there was a Mensa Convention in San Francisco. Mensa, as you
know, is a national organization for people who have an IQ of 140 or higher.

Several of the Mensa members went out for lunch at a local café. When they
sat down, 1 of them discovered that the salt shaker contained pepper & the
pepper shaker was full of salt.

How could they swap the contents of the 2 bottles without spilling any &
using only the implements at hand? Clearly this was a job for Mensa minds.

The group debated the problem, presented ideas & finally came up with a
brilliant solution involving a napkin, a straw & an empty saucer.

They called the waitress over, ready to dazzle her with their solution.
"Miss", they said," We couldn't help but notice that the pepper shaker
contains salt & the salt shaker - " but before they could finish, the
waitress interrupted, "Oh! sorry about that".

She leaned over the table, unscrewed the caps of both bottles & switched
them.

There was dead silence at the Mensa table. 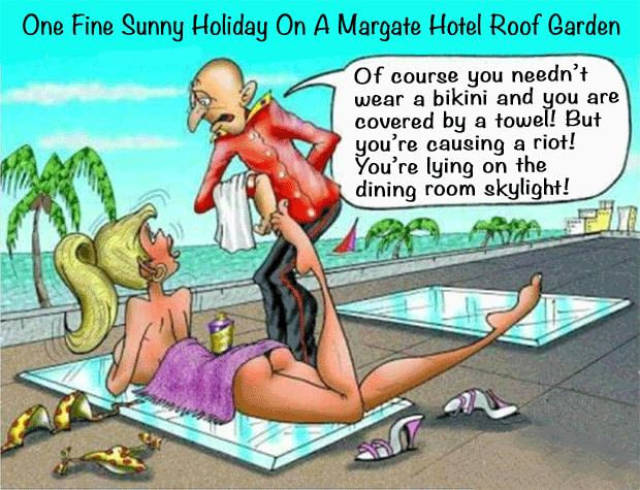 A Department of Water Resources representative stops at a Texas ranch and talks with an old rancher. He tells the rancher, "I need to inspect your ranch for your water allocation."

The old rancher says, "Okay, but don't go in that field over there."

The Water representative says, "Mister, I have the authority of the Federal Government with me.. See this card? This card means I am allowed to go WHEREVER I WISH on any agricultural land. No questions asked or answered. Have I made myself clear? Do you understand?"

The old rancher nods politely and goes about his chores.

Later, the old rancher hears loud screams and sees the Water Rep running for his life. And close behind is the rancher's bull. The bull is gaining with every step.

The Rep is clearly terrified, so the old rancher immediately throws down his tools, runs to the fence and yells at the top of his lungs.....

"Your card! Show him your card!"

Staff member
An Amish woman and her daughter were riding in an open buggy one cold, blustery January day. The daughter said to the mother, "My hands are freezing cold." The mother replied, "Put your hands between your legs. The body heat will warm them up." So the daughter did, and her hands warmed up.

The next day, the daughter was riding in the buggy with her boyfriend. The boyfriend said, "My hands are freezing cold." The daughter said, "Put them between my legs, they'll warm up."

The next day, the boyfriend is driving in the buggy with the daughter. He said, "My nose is freezing cold." The daughter said, "Put it between my legs. It will warm up." He did, and his nose warmed up. 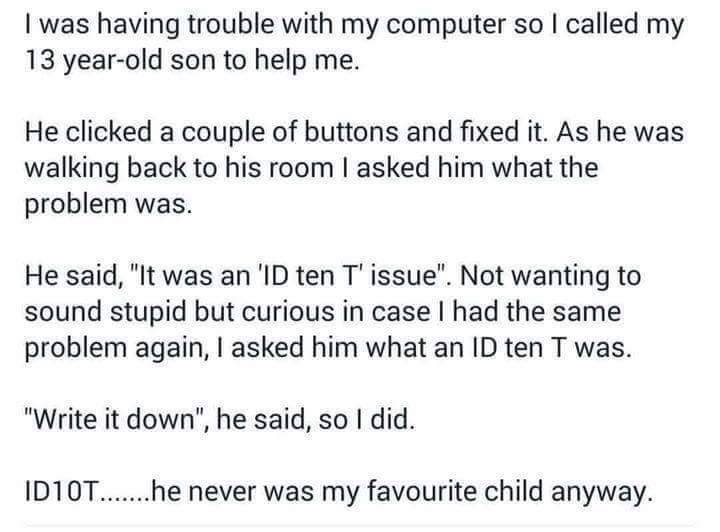 A lawyer married a woman who had previously divorced 10 husbands. On their wedding night, she told her new husband, "Please be gentle, I'm still a virgin."

"What?" said the puzzled groom. "How can that be if you've been married 10 times?"

"Well, Husband #1 was a sales representative. He kept telling me how great it was going to be.

Husband #2 was in software services. He was never really sure how it was supposed to function, but he said he'd look into it and get back to me.

Husband #3 was from field services. He said everything checked out diagnostically, but he just couldn't get the system up.

Husband #4 was in telemarketing. Even though he knew he had the order, he didn't know when he would be able to deliver.

Husband #5 was an engineer. He understood the basic process, but wanted three years to research, implement, and design a new state-of-the-art method.

Husband #6 was from finance and administration. He thought he knew how, but he wasn't sure whether it was his job or not.

Husband #7 was in marketing. Although he had a nice product, he was never sure how to position it.

Husband #8 was a psychologist. All he ever did was talk about it.

Husband #9 was a gynecologist. All he did was look at it.

Husband #10 was a stamp collector. All he ever did was... God! I miss him! But now that I've married you, I'm really excited!"