Hi guys, gals and everyone else,

To make a long story short I've wound up with a spiffy new FV! My first impression was that this thing is much more solid than I anticipated. I expected shiny plastic, and instead received a pretty darn solid block of metal, kinda like a microphone stuck to the bottom of an aluminum baseball bat. Designed and assembled by FlashVape in Vancouver, BC, in Canadias Pacific SouthWest.
https://flashvape.com/

Unlike many vapes this one doesn't have a temp gauge - you press the button for a 2 second warmup, and then start inhaling, releasing the button near the 7 second mark while continuing to inhale. If you press the button too long it'll likely combust, but it's easy to figure out a routine with a little persistence, and who doesn't enjoy testing a vape?

So I've used a few different vapes, so screw the manual and lets load and go, right? Not quite - vapour was light. Certainly very flavourful, but lighter and wispier than I'd been anticipating, especially given the comments and reviews online. Of the 3 batteries it seems that 2 are DOA, and Numero Tres was working kind-of ok, so I checked the drawer and discovered a few different Milaana and Zion batteries, as well as a 2pack of blue ones labelled simply 'Li-ion 18650 3.7v 2600 mAh'. So a Millie brownie went in, and while waiting and watching I saw vape, and by the time I got to draw there was definite combustion happening. So a good clean, put the wee spacer back under the screen, and this is working more like originally anticipated.

So I've learned that FV requires a certain amount of horsepower to work efficiently. I've also discovered that my unit came with a 3.65v charger, so the iCore chargers should work fine, and we won't need the single-bat charger the unit came with..

Anyways, 1-2 second preheat, and start slowly drawing whilst watching a line of vapour head nicely into the straw. Did I mention that the top of the FV is clear glass, so you can watch the vapour be drawn into the straw while you inhale... VapeTV!

Speaking of FFS I *just now* combusted while watching Vape TV on the FV (the window is vape TV, no?)- thats a little wispy, let's touch that butto, oops, ffs...", and just like that it was time for another cleaning. I also realized that if anyone were to randomly look over they'd wonder why I was doing silent karaoke with vape coming out my ears.

Anyways, time to go back through the thread. I'm not familiar with FVs product line, but the aim is to use this unit with resin, and some of the comments and vids online suggest this is easily doable. The only drawback would be the glass straw combined with the narrow base. I'm not really clumsy, but when I am they are usually bangy and smashy. FV realized this and sent spares.
Vapes... Ingests... Topicals...

Accidentally posted a mini FV review in the press thread... Copied here for your reading pkleasure...


Killick said:
So FlashVape send me an evaluation vape to try. And sent instructions on how to use it with resin. Firstly it's a pretty decent vape on it's own. It's portable, but tippy, so I'd call it an around the house portable, as opposed to a pocketable cycling portable, say. It's solid aluminum, outside of the glass viewport on the top where you can watch vapour form. - VapeTV is a great show! 3-5 second preheat - it's kinda like a Milaana or other on/off styles. It's both convection or conduction depending on how it's set up. It's nice for flower. But Team FV sent me instructions on how ti use it for resin, which are more difficult than they sound: "just smear a blob directly on the heater screen". It doesn't stick like that for me, so instead i drop a flat piece on top and let 'er rip. And rip she does. I kinda think of it as a portable dab station... The base looks like a baseball bat, the top like a microphone, and it's mostly nice solid metal. Smoky karaoke, cause vapy karaoke doesn't sound natural...

So the flattened 2g blob on the desk is very nice to look at, with a shimmery depth deeper than it's 1/32nd"ish outside...

I had a Flashvape a few years ago.

Any updates on this?

it looks stupidity simple...which makes it ideal for someone like me

reviews have been strictly positive and it's made in Kah Nah Dah Eh?

Thinking of would be suitable for travel and a one hander. Sounds solid enough to take skiing (torches suck in the cold/ wind) 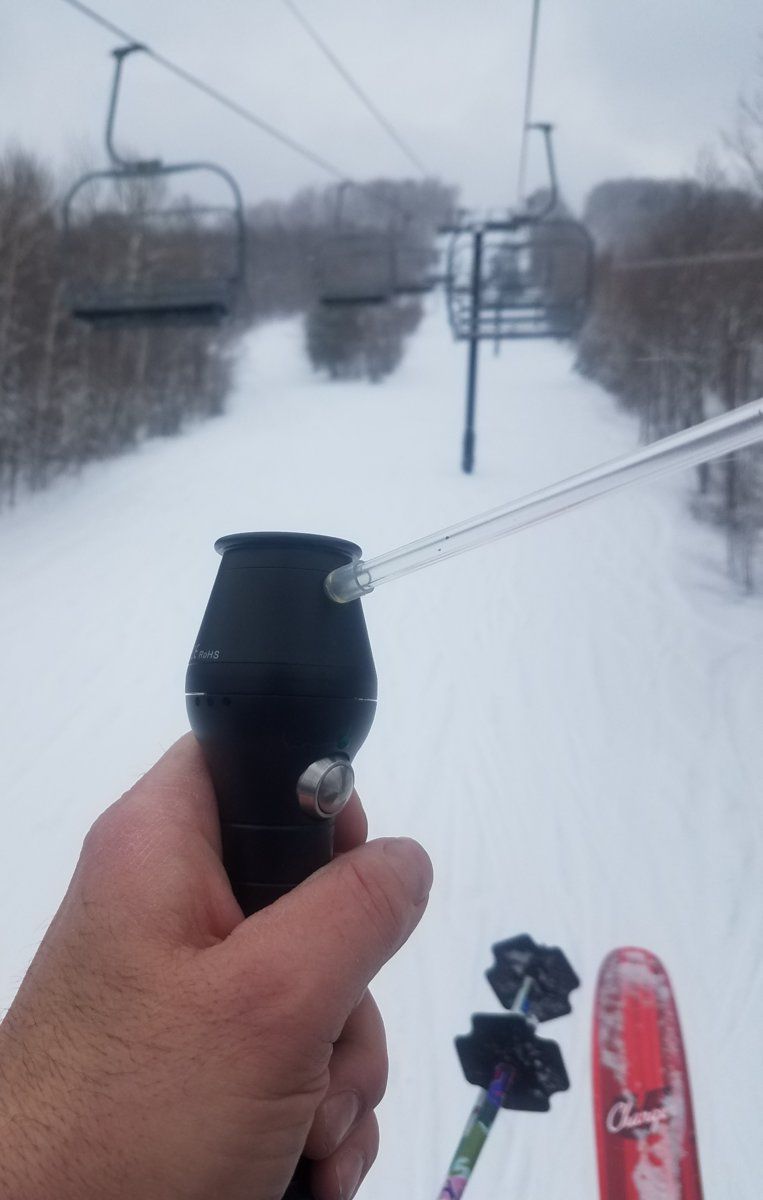